DJ Spinderella Speaks On “Abusive” Relationship With Salt-N-Pepa, Being Erased From Biopic: “People’s Memories Are Being F*cked With” 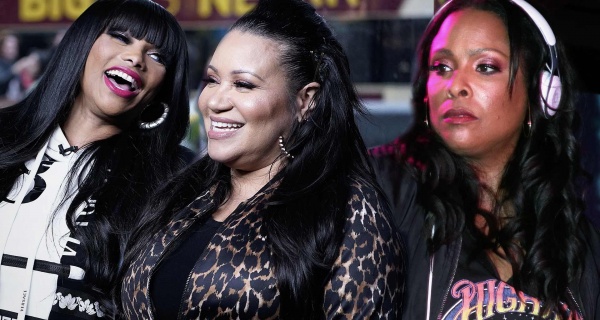 When talking about whether she was upset about not being included in the recent Salt-N-Pepa biopic, which aired via Lifetime a couple of weeks ago, DJ Spinderella explained that in the aftermath of the situation, she’s been left with a lot of emotional issues, some of which even found their way into her romantic relationship.

“I was very upset. This played out in different ways for me,” the DJ said. “I’ve definitely had depressions about it, bouts. I’ve had self-esteem issues, I had confidence issues. It was trickling into my relationship and thankfully, I have a great, supporting partner and he knew.”

“It was just hard… it was a lot,” she continued. “Let me tell you what it does to you. It makes you feel less than a person. It makes you feel inferior. You have an inferior complex. You have confidence issues. You have low self-esteem — never believing that I was good enough, always having to prove, overprove. And never getting that acknowledgment, so yeah, those are the effects of that behavior.”

Discussing how she felt about being left out of the biopic now, Spinderella said she was honestly okay and was relieved to no longer be in a toxic dynamic with her group members.

“I’m good,” she said. “I like not being in an abusive relationship. I like being confident. I like being encouraged. I surround myself with people that encourage me and bring me up. I have countless people that love and support me and do not discourage me. That’s what we should be doing. I really, really, really — in my heart, cannot tell you, how sorry to you guys I am. I wanted more from us. And trust me, I’m getting the short end of the stick. This is not about money, this is not about clout, this is not a publicity stunt.”

“You can’t disguise a truth,” she added later. Speaking on how she also wasn’t being recognized with Salt-N-Pepa for a lifetime achievement award the duo was receiving, Spinderella added, “You’re going to tell it like I wasn’t there when I was? This is why the viral attention is happening because people’s memories are being f*cked with. History is being written right now and you’re okay with re-writing it to satisfy whatever your ego tells you I did to hurt you. I don’t know what that is. There was no issue that should warrant that behavior.”

“Regardless of what all is happening, we’re going to always have this issue because my name — my likeness — is attached to their success, she continued. “Unless we come up with a plan to figure that out, which a settlement was done for the majority of that, but there’s still things like these lifetime achievement awards that I should be a part of and that I will continue to pursue.”

“I wish I could answer these questions for everybody I just — I’m as broken about it and disappointed about it but I have been dealing with this so I know how this goes with them,” she added. “It would be a shock to me for them to act differently.”

In the end, Spinderella said that even though she holds fond memories of her time with her groupmates, she feels she shouldn’t have to fight to have her name placed alongside theirs. To her, it’s just unfair to the fans.

“I mean we’ve had a lot of great times, but they’ve had this underlying issue and really acted out on it in the past couple years. The fact that I would ask about fixing or defining — I even just wanted my name to be — people kept seeing three people and calling us ‘Salt-N-Pepa’ and would be like ‘Who’s that?’ It wasn’t fair to the new fans that they didn’t know who the [third] person was,” she said. “So I made it clear that I wanted to define that with them, and I wanted their support on that, and it was like ‘How do we do that?’ ‘Why’re we gonna change our name?’ ‘We’re Salt-N-Pepa.’ I didn’t ask you to change your name, I’m just saying like how do you fix that? How do you justify that? Let’s talk about it. I wanted to sit down with what I called my sisters. And I wanted to sit down with these women who consider themselves ‘bosses’ that would continue to allow me — just make me feel I’m nothing. I was giving them the opportunity to fix it on various occasions and define it and they didn’t see fit to do that so that’s not what I’m tolerating in my life right now.”

While it doesn’t seem things between the trio will be getting better anytime soon, hopefully, DJ Spinderella will continue healing from their collective past and keep pushing for the recognition she deserves.