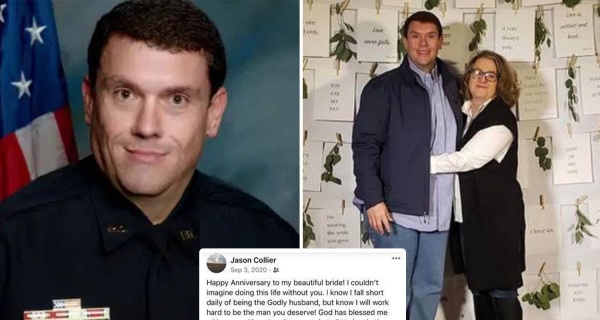 This cheating cop just got busted.

A married Texas police chief and father of four has been placed under social media arrest by his girlfriend for allegedly leading a “double/triple life” with at least two mistresses. The scorned woman aired his dirty laundry in a Facebook post with over 37,000 shares.

The scandal came to light after Jason Collier, 41, chief of the Stinnett Police Department, uploaded a since-deleted Facebook post commemorating his anniversary with his wife, Opal, the Heavy reported.

Things went south for him after one of Collier’s girlfriends, Cecily Steinmetz — who likely saw the adoring post — exposed his triple infidelity in the blistering message on the City of Stinnett Facebook page. The post included romantic snaps of Steinmetz and the adulterous cop.

“Chief Jason Collier is living a double/triple life,” wrote the Amarillo native. “I was his girlfriend until yesterday.”

Steinmetz continued, “He lied to me and presented me with fake annulment documents when I found out he was married. I also found out about a 2nd girlfriend, Kristi, last night. He has lied to us, our children, and asked us both to marry him.”

In addition to those bombshells, Steinmetz revealed that Collier “would also visit me in Amarillo when he was on shift,” the unaware mistress added. “We just returned from vacation in Taos [New Mexico] on Sunday — meanwhile, his other GF was told he was on work assignment in Portland, OR.”

Steinmetz concluded that Collier, who also happens to be an ordained minister, was a “poor representative” of the city of Stinnett.

The other girlfriend, Kristi Shaffer, wrote under the post that she had also been dating Collier and that they had been engaged since December, the Sun reported.

Collier has yet to address the allegations. However, the city of Stinnett issued a statement Wednesday on its Facebook page claiming it was aware of “the current situation surrounding the Chief Of Police.”

The Stinnett Police Department’s Facebook page and Collier’s personal profile have been taken down.

“The city is taking this seriously and will be looking into any violations of city policy,” city manager Durk Downs said in a statement. “Chief Jason Collier has been placed on leave while the city investigates.”