John Thompson Was More — Much More — Than a Basketball Coach 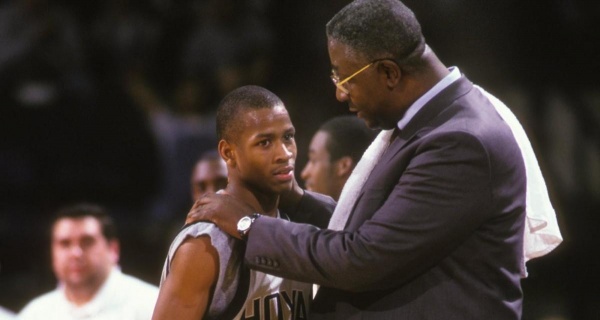 By the time he summoned Rayful Edmond to a meeting on an autumn afternoon in 1988, the Legend of John Thompson was already large. He was the Black coach of the Black college basketball team that was equal parts athletic and cultural force. On the court, Thompson taught his Georgetown Hoyas to play swarming, suffocating defense. Off the court, he hounded his players — who were among the few Black students at Georgetown — to go to class, keeping a deflated basketball in his office to remind them that their athletic careers would eventually come to an end. He brooked no dissent. If an opponent threw an elbow, he didn’t necessarily object to his players responding with a punch. When a reporter asked him how it felt to be the first Black college basketball coach to win a national championship, he replied that the question was insulting because it assumed other Black coaches hadn’t been talented enough to win it all. Standing 6-foot-10 with a booming voice and an urban dictionary’s worth of curse words, Thompson inspired a potent mixture of fear and respect in players, coaches, referees, journalists, professors — even drug kingpins.

Edmond, at the tender age of 23, was the biggest crack cocaine dealer in Washington, D.C. His gang made as much as $2 million a week in sales and was linked to as many as 30 murders. Edmond was also a big Georgetown basketball fan. When Thompson learned that Edmond was palling around with two of his players, he told them to stay away from the drug dealer. Then Thompson put out word on the street that he wanted to talk to Edmond himself. Edmond dutifully showed up at Thompson’s office, where the coach delivered the same no-contact message. Edmond promised to abide by it. Several months later, after Edmond was arrested on a 39-count federal indictment, Thompson went on ABC’s “Nightline” and told Ted Koppel about the encounter. That’s when the Legend of John Thompson — the basketball coach who got in the face of an infamous drug dealer and told him to keep the hell away from his program — grew even larger.

But in his posthumous autobiography, “I Came as a Shadow,” Thompson, who died at the age of 78 in August, lets a little air out of that legend, or at least tries to put a different spin on it. “A myth has grown about me threatening Rayful and ordering him to stay away from my players,” Thompson writes. “I’ve always been offended when some people assume our interaction had a physical component.” What actually happened, Thompson reports, is that he reasoned with Edmond and appealed to the drug dealer’s better angels. “I thought of Rayful as my neighbor’s child, who was exposing my kids to some trouble. I wanted to protect my players, my university and myself. The conversation was between two Black men from Washington who both loved basketball, respected each other as human beings and had enough intelligence to work out a solution to our problem.” His confrontation with Edmond, Thompson concludes, “was less than what everybody said, and also more.”

In “I Came as a Shadow,” Thompson — who was long wary of revealing too much about himself and yet was continually frustrated about being misunderstood — finally gets to cast his legend on his own terms, in all of its contradictions. He was someone whose job was to win basketball games, and who relished his ability to do so, but was “paranoid about being acknowledged too much as a coach.” He liked to remind his players that “far more money is made sitting down than standing up” — and would interrupt practice to deliver a two-hour lecture about the legacies of Martin Luther King Jr. and Malcolm X — but he “resented being portrayed as some kind of social worker.” Thompson writes, “I didn’t want to be equal to the white man, I wanted to kick his ass.” In his autobiography, he demonstrates that his legend was less than what it was made out to be, and also more — much more.

Thompson grew up in segregated Washington. His mother was an educator who couldn’t get a job teaching so she became a maid; his father couldn’t read or write but, at the tile factory where he worked, “he trained every new boss they gave him.” The only white people Thompson encountered as a child were the nuns and priests at the local Catholic school he attended. They branded Thompson, who was unable to read, “retarded.” It wasn’t until he went to public school in sixth grade, where he was taught by a Black teacher who helped find him a Black reading specialist, that Thompson began to succeed academically. “Black educators were able to help me,” he writes, “and white ones did not.”

Thompson was a talented basketball player and received scholarships to attend a predominantly white Catholic high school in Washington and later Providence College. In the mid-60s he played two seasons in the N.B.A. for the Boston Celtics, backing up Bill Russell. Then Thompson retired from the N.B.A. “to begin the rest of my life.” He didn’t expect basketball to be a part of it. He returned to Washington and worked with troubled youths (one later became a hit man) while earning a master’s degree in education. A small Catholic high school, St. Anthony’s, hired Thompson to coach its pitiful boys’ basketball team — a side job that was akin to supervising “an after-school gym class.” But then Thompson’s competitive juices got flowing, he began combing the city’s playgrounds and Boys Clubs where he had once played for recruits, and before long St. Anthony’s became a powerhouse. In 1972, Georgetown hired him as its basketball coach.

Georgetown was, as Thompson and his fellow Black Washingtonians put it, “Across the Park” — referring to Rock Creek Park, which served as the informal dividing line between Black and white Washington. The university was notoriously inhospitable to Black people, but it hired Thompson because of his race — partly as a realization that it needed to make amends to Black Washingtonians, but also in an attempt to improve its basketball team, which in turn would raise Georgetown’s profile. “He knew any successful team needed Black players,” Thompson writes of Georgetown’s dean of admissions. “He knew I was a Black coach who had a lot of Washington’s best Black players on my teams. Are you starting to get the picture?”

The plan worked. Thompson turned Georgetown into one of college basketball’s dominant teams, and the university rose to prominence right along with it. Between 1983 and 1986, when Georgetown appeared in two Final Fours and won one national championship, applications to the school increased by 45 percent. Thompson boasts, not entirely unreasonably, “Basketball gave Georgetown a national reputation.” Meanwhile, the Hoyas, with their Black coach and their Black players, achieved a different sort of acclaim among African-Americans. Thompson recalls the many Black people who approached him in airports and elsewhere to thank him for what he was doing. “More than a few,” he writes, “thought Georgetown was a historically Black college, based on our team. That always gave me a good feeling.”

But there were a lot of hard feelings, too — typically having to do with race. Thompson was protective of his players, many of whom would not have been admitted to Georgetown but for basketball. He expected them to go to class and get good grades; if they didn’t, he held them out of practices or games. But Thompson was loath to let anyone outside his team know. “It would have been harmful to expose their weaknesses,” he argues. “You think we put a sign on the door saying my father couldn’t read? Our neighbors didn’t even know.” This led reporters, most of them white, to accuse him of being paranoid or militaristic — or worse. One branded Thompson “the Idi Amin of college basketball.” His teams were invariably described in the press as thuggish and scary. “When Bobby Knight’s Indiana team” — which was disproportionately white — “played great physical defense, they were ‘tough,’” Thompson writes. “When Georgetown pressed full court, we were intimidating.”

The game itself did not always provide a refuge. When a white referee named Reggie Copeland made what Thompson felt was a bad call that knocked Georgetown out of the N.C.A.A. tournament one year, Thompson wondered if Copeland’s upbringing in the Jim Crow South had played a role: “What did Copeland think about a Black team from up North, with a big Black coach hollering on the sideline?” On other occasions, Thompson worried that Black referees didn’t give him a fair shake because they were afraid that “a lot of people thought Black refs would conspire to help a Black coach.” His ferocious desire to win was about more than a mere game. “I knew that my success or failure would influence opportunities not only for other Black coaches, but for Black people in general,” Thompson writes. “I had to win because Black people didn’t have the right not to be successful.”

Thompson (or, perhaps, his co-author, Jesse Washington) is a lively and entertaining writer. Describing the hush that fell over a D.C. playground when Elgin Baylor joined a pickup game Thompson was playing in as a teenager, he writes, “I think the squirrels stopped gathering nuts.” Basketball fans will relish his stories about coaching Patrick Ewing, Alonzo Mourning, Dikembe Mutombo, and Allen Iverson and his explanation for why Michael Jordan was left open to hit the jump shot that helped North Carolina beat Georgetown in the 1982 national championship game. And Thompson makes news with his announcement that he’s come to the conclusion that the N.C.A.A. should allow college basketball players to be paid.

The greatest value of “I Came as a Shadow,” though, is that it offers us one last, long opportunity to hear Thompson’s singular voice. Today, with LeBron James running a voting rights group and Mike Krzyzewski recording a Black Lives Matter video, political activism is almost expected from basketball players and coaches. But when Thompson was raising a ruckus four decades ago, as a “dark-skinned, loud-voiced Black man who refused to be apologetic or grateful for the rights God intended him to have,” he often stood alone. Just as Thompson acknowledges the people who made his own success possible — “the ones who lived in bondage, or scrubbed toilets when they couldn’t teach school, or went to work instead of learning how to read” — today’s socially engaged players and coaches owe him a tremendous debt.

Thompson would sometimes find himself daydreaming about how many more championships he could have won if he had focused only on basketball, but he would quickly push such thoughts out of his mind. After all, he writes, “I never had the luxury of just being a basketball coach.”