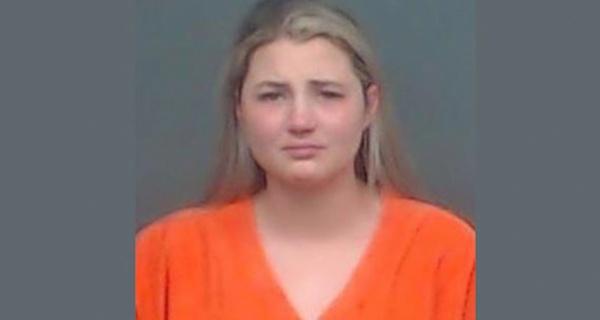 Ashlyn Faye Bell is the former teacher’s aide from Texas facing felony charges after she was accused of engaging in sexual activity with three teenage students. She was arrested over the summer and formally indicted on October 8, 2020, court records show.

Bell worked as a teacher’s assistant at Texas High School, which is part of the Texarkana Independent School District, during the 2019-2020 school year. In June, another teacher overheard a group of boys discussing how one of them had hooked up with Bell and could have gotten her pregnant, according to a probable cause affidavit cited by TXK Today. That teacher confronted the boys and police launched an investigation.

Police said two of the students involved were 17 years old at the time. The third student was 16.

Here’s what you need to know:

1. The 3 Boys Involved Told Police They Had Sex With Bell At Her Home During the Fall of 2019

Bell has been accused of having sex with three male students during the fall of 2019. According to probable cause affidavits cited by the Texarkana Gazette, one of the 17-year-old boys told police that he communicated with Bell over Snapchat. He said that during the Thanksgiving break, he met up with Bell at a truck stop and she drove them back to her house in New Boston. The teen said Bell’s baby was in the car seat.

The first teen said Bell put the baby to bed and then they went into Bell’s bedroom. He claimed they engaged in sexual activity and then she drove him home. In an interview with police, the boy claimed that he knew of two other teens who had also hooked up with Bell.

The second 17-year-old told investigators he visited Bell at her home multiple times because she was his tutor. He claimed they hooked up on his third trip to the house.

The 16-year-old told police he sent Bell a message over Snapchat on November 22, 2019. He said he wrote that he was coming to see her but that he meant it as a joke. He said Bell responded and picked him up at his house later that night, with her baby in the car seat. He told police they had sex again the following weekend.

2. Report: Bell Told One of the Teens He Was ‘Not the Daddy’

The investigation into Bell’s conduct began in mid-June, according to the Texarkana Gazette. Another teacher was alerted to the alleged sexual activity after she overheard a group of students talking about Bell.

According to the affidavits, the group was joking that one of the 17-year-olds could have gotten Bell pregnant. When the other teacher asked the boys to explain what was going on, the teen said that Bell had told him “he was not the daddy.” The teacher informed the Texarkana Police, but the New Boston police department took the lead on the case because the alleged sexual activity was said to have taken place at Bell’s home there.

Bowie County court records show that Bell was arrested on June 24. The records state that she was accused of having sexual relations with the 16-year-old on November 22, 2019. The dates for the 17-year-old boys were both listed as November 15, 2019.

Bail was set at $50,000 for each of the three offenses. Bowie posted bond and was released the day after she was arrested, court records indicate.

3. Bell Is Still Licensed as an Educational Aide In Texas

Bell earned an “Educational Aide I” certificate from Texas’ education department in early August 2019. The certificate is valid until August 2021. As of this writing, Bell’s certificate remained active and had not been suspended or revoked, though the profile does not that she is “under review by the TEA Educator Investigations Division.”

According to the Association of Texas Professional Educators, Bell did not need a college degree to be eligible for this type of certificate. The organization explains on its website that an applicant for an Educational Aide I Certificate must:

*Have experience working with students or parents as approved by the employing superintendent. Experience may be work in church-related schools, day camps, youth groups, private schools, licensed daycare centers, or similar experience.

It’s unclear whether Bell has a college degree or attended a university. Since her arrest, her Facebook and LinkedIn pages have either been suspended or deleted.

4. Bell Was Arrested One Month After Her Employment With the School District Ended

Bell worked as an instructional aide with the Texarkana Independent School District during the 2019-2020 school year. Chief communications officer Tina Veal-Gooch confirmed to Heavy that Bell began working in the district on August 5, 2019, and that her employment ended on May 22, 2020. She did not provide any more details, noting in an email that “this is a personnel issue and much of the information is protected.”

It was not clear whether the end of Bell’s employment was related to the accusations that later surfaced against her. Bowie County court records show Bell was arrested on June 24, more than a month after she stopped working in the district.

5. Bell Could Face Decades In Prison If Convicted On All Four Charges

Bell is facing four second-degree felony charges in Bowie County, Texas: Two counts for “Improper Relationship Between Educator and Student” and two counts of “Sexual Assault of a Child.”

Prosecutors filed the separate charges because of the ages of the alleged victims. In Texas, the age of consent is 17. But it is illegal for an educator to have a physical relationship with a minor student, regardless of the student’s age, unless the two are married.

Sexual conduct with a child younger than the age of 17 is also a second-degree felony in Texas.

If convicted, Bell could face decades in prison. She faces between two and 20 years behind bars for each felony count.