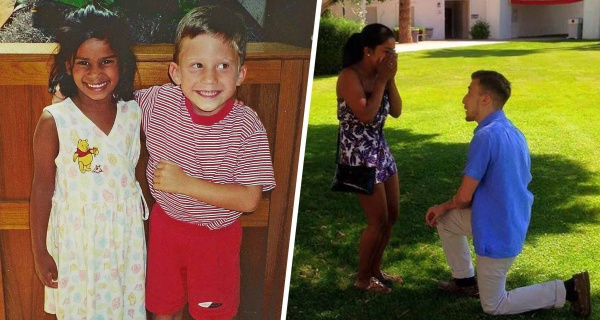 Nearly 20 years ago, a 3-year-old Matt Grodsky stood up in front of his entire preschool class, declaring that he would one day marry classmate Laura Scheel.

The two, both now 23 years old, met in preschool in Phoenix, Arizona, and Grodsky was immediately drawn to Scheel.

"I don't remember the first time I saw her, but she was always a girl who let me follow her around," Grodsky recalled, "I'd always try to impress her by reciting lines from movies like 'The Lion King' and stuff like that."

Some of Grodsky's and Scheel's earliest memories are about each other – play dates and trips to the movies (obviously with parent chaperones for the two little lovebirds).

Grodsky was infatuated and Scheel felt the same way.

"When you like someone, you just kind of stand up and say it," he explained, which is exactly what he did.

He declared his love for Scheel before all of his 3- and 4-year-old peers, who burst into laughter. Grodsky's response? "Just you wait."

It ended up taking quite a bit of waiting. The young couple went to two different elementary schools and lost touch, only watching each other grow up through the annual Christmas cards the two families would send to one another. 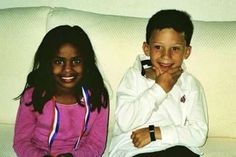 Then in the fall of their freshman year of high school, once again at two different schools, Scheel was looking through a friend's phone and saw Grodsky's name. It turns out Scheel's friend had gone to middle school with Grodsky, and when the friend found out that they had been quite the item in preschool, she offered to reconnect them.

"I was a freshman in high school so I was like, 'I don't think so!'" Scheel said. "But then she ended up giving him my number and he texted me and we hit it off ever since."

"Right after we graduated from high school, we were pretty hesitant. We were like, 'Do we stay together? Do we try to make it work?'" Scheel explained.

They made it work. Scheel went to Northern Arizona University, while Grodsky went to Columbia College Chicago, more than 1,600 miles away. It wasn't easy, but after some trial and error freshman year, they got a system down, figuring out a schedule for when they would visit each other and watching "Friends" on Netflix together when they were apart.

Grodsky didn't wait until they finished college to pop the question. On May 23, 2015, as the couple prepared to start their senior year, he brought her back to the place where it all began: their preschool.

Grodsky had bought an engagement ring two months before this day and had already received her dad's blessing. He had even stationed his brother at the school before their arrival so he could position himself in the perfect location to capture a photo of the moment.

On the way there, Grodsky repeatedly checked his pockets for the ring. When they arrived, he got down on one knee.

The answer - a resounding yes! And Grodsky's brother brought out a picnic basket (the very same one that Grodsky's dad used when he proposed to his mom) full of bridal magazines and sparkling cider, then bowed out to give the newly-engaged couple a private picnic to celebrate.

Grodsky's uncle, who officiated the marriage, put it best during their ceremony: "For most kids in preschool, it's about finding your snacks and your sleeping mats, but for them, it was about finding their soulmates."