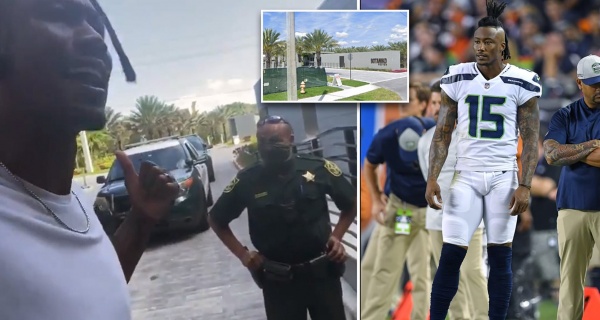 Former Jets wide receiver Brandon Marshall did not receive the warm welcome he was hoping for when he arrived at his new home on Thursday.

Marshall said that security guards at his new neighborhood in South Florida called the Broward County Sherrif’s Office on him while he moved in. In a video shared on Instagram, Marshall can be seen confronting the deputies who arrived on the scene.

Marshall, who spent two seasons with the Jets, has lived in Weston, Florida since 2012. He is currently in the process of opening House of Athlete, his second gym in the area, to serve young athletes in the community.

“The reality is people fear our skin,” Marshall said. “That’s the reality. Like, I just moved into a new house and all I asked the guy was to call the front desk, ’cause we literally just got our keys.”

Marshall’s run-in with police comes in the wake of the Jacob Blake shooting in Kenosha, Wisconsin last weekend. Marshall has been extremely vocal on the subject of police brutality and social and racial injustices in America since George Floyd’s killing at the hands of Minneapolis police officer Derrick Chauvin in May. Marshall previously expressed regret for not kneeling during the national anthem as a player.

“The first thing that came to my mind, and I’m just being honest, was: ‘I got a mom that don’t work,” Marshall said. “I got a sister with four kids that don’t work and I’ve been taking care of for 10 years. If I take this knee, what will happen?’ And I remember feeling so broken and so hurt that that was the first thing that hit my mind. ‘Do I kneel for the entire community, or do I stand for my mom, my brother my sister?’ And looking back on it, I am ashamed that I didn’t take that knee.”