A ‘Fire Tornado’ Warning? Weather Service Issues What Could Be A first At California Blaze 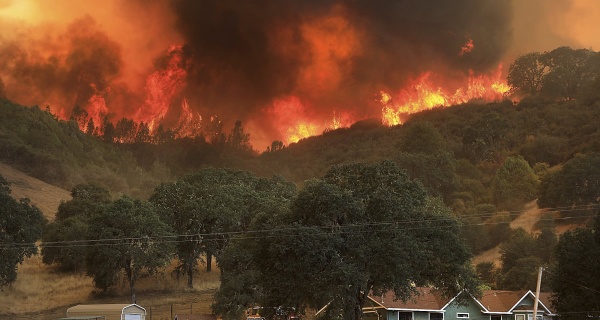 The Reno office of the National Weather Service warned Northern California of a fiery tornado Saturday afternoon that had sprung up near a large, fast-moving wildfire in the Sierra.

It is the first known issuance of a tornado warning for the climate phenomenon since it burst into California’s consciousness during the deadly Carr Fire in 2018.

“It’s probably the first time it’s been issued outside of a thunderstorm environment,” Hohmann said.

Just before 3 p.m., Hohmann, working from the Reno forecast office, observed a cloud forming in Lassen County by the 2,300-acre wildfire which started in Sierra County in the Tahoe National Forest. He and his colleagues knew it was capable of forming into a tornado and spreading fire around the area.

Winds hit 60 mph in the area, whipping up the cloud, posing “an extremely dangerous situation for firefighters,” according to the warning.

“The Loyalton Fire to the east of the Sierra Valley exploded most impressively this afternoon, with a very large pyrocumulus and reports of fire tornadoes,” the warning said. “Due to the possibility of very strong fire-generated winds and extreme fire behavior with danger to fire personnel, a tornado warning was issued to heighten awareness in the area of the fire”

Dan Satterfield, a meteorologist who blogs about wild weather for the American Geophysical Union, wrote on Saturday: “Fire tornadoes happen, but the issuance of a tornado warning on one is a first.”

Hohmann and other forecasters decided that, though unconventional, the tornado warning was the most effective form of messaging to warn people in the vicinity of the bizarre phenomenon.

Forecasters warned area residents to stay out of the fire zone. By 3:30 p.m., the Reno NWS office said on social media that the fire cloud had weakened and the threat of a tornado forming was diminished. The tornado warning was allowed to expire, though forecasters warned that “extreme fire behavior will continue into this evening.”

Later on Saturday, social media began to light up with video of a tornado near Halleujah Junction, several miles east. One observer, Barry Winston, posted video of the tornado in a time-lapse, showing it “exploding in size.”

The Loyalton Fire, which is mainly burning in Sierra County, has charred more than 20,000 acres since sparking on Friday near Mount Ina Coolbrith, which is east of Loyalton. Officials in the Tahoe National Forest, where the fire is burning, said the blaze is mainly consuming grass, sage and juniper and was 5% contained Saturday afternoon.

“Fire behavior is extreme, and a smoke column will be visible throughout the Sierra Valley and North Reno,” fire officials wrote around 4 p.m.

Before the Carr Fire, there had been only one documented case of a so-called “firenado” in the Canberra Firestorm of 2003 in Australia making this an extremely rare event, according to Neil Lareau, a scientist, and professor at University of Nevada, Reno.

The event in 2018 in Shasta County was the second such event, scientists said at the time.

Lareau, who spoke to The Sacramento Bee in 2018, and two co-authors released a study documenting the fire tornado and the factors which contributed to its formation.

The tornado formed its spin because of a pre-existing wind condition called a shear, and because of clouds formed on top of the fire plume, Lareau said.

A fire-fueled thunderstorm cloud can form on top of the fire’s smoke plume, allowing the plume to grow vertically very quickly, he said.

When the plumes grow, a wind condition called shear happens near the ground. Shear is a wind pattern in which wind is blowing in two opposite directions very close to each other – Lareau compared it to a busy freeway with a center divider.

The wind blowing in opposite directions is what formed the tornado’s spin, Lareau said. He said it’s similar to how a paddle wheel, placed in the center divider of the busy freeway, would begin to spin rapidly.

Lareau said that much of the radar and satellite technology used in monitoring the event could have potential applications in a warning system.

“It’s not a panacea,” Lareau said in 2018. “There are a number of things to be done to mitigate fire damage in California. But minutes matter.”