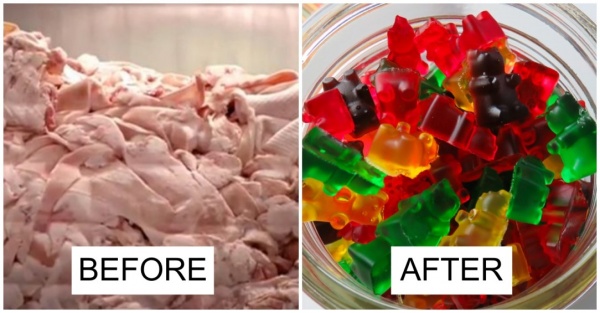 Who doesn't enjoy gummy bears? Whether it's a topping on your froyo or you're eating them straight out of the bag, their chewy goodness adds a pop of color and a burst of sugar to your life.

Gummy bears may seem like they're the most harmless food on the planet. They're small, unassuming treats that come in a variety of fun colors. They also have that coveted nostalgic factor.

These cute little bear-shaped gummies and their chewy texture takes us right back to the good old days.

However, a deeper look into the ingredient list of gummy bears will most likely change your entire point of view on these chewy sweets.

If you look at the ingredients on a package of gummy bears, yes, even the organic ones, you'll see the expected things, like corn or brown rice syrup and sugar.

But you'll also see something called gelatin. It may seem innocent enough, but its source will surprise you.

So, what exactly is gelatin?

Gelatin is a yellowish, odorless, and nearly tasteless substance that is made by the prolonged boiling of the skin, cartilage, and bones from animals. It's made primarily from the stuff that meat industries have left over — we're talking about pork skins, horns, and cattle bones.

Animal parts, people. It's made from animal parts. Yummy.

As adults, we have to sometimes accept the fact that certain things just aren't as great as we had thought that they had been when we were kids. Sometimes, all that we have to hold onto is that nostalgic element.

However, gummy bears take this to a whole other level. After learning what these seemingly innocent treats are made out of, any kind of nostalgia that we may have for them basically gets thrown out the window.

I guess if you're into the philosophy of using the whole animal, you'll be psyched about this. Plus, gelatin does contain 18 amino acids, so it does offer some nutritional benefits if you can get past the fact that you're consuming the leftover parts of an animal.

But if you're vegan, you'll definitely want to skip the chewy candies and your great-aunt's Jell-O mold — it's made with gelatin, too.

If this tidbit of info grosses you out, you'll want to pay closer attention to these products' food labels the next time that you go grocery shopping. And if the thought of even seeing another gummy bear ever again is making you sick, there's an easy solution.

Instead, let's all go back to stanning chocolate, which isn't made from the parts of an animal and also offers an astounding amount of health benefits. Also, it doesn't hurt that it's delicious!

Editor's Note: This article was originally posted in August 2015 and was updated with the latest information.