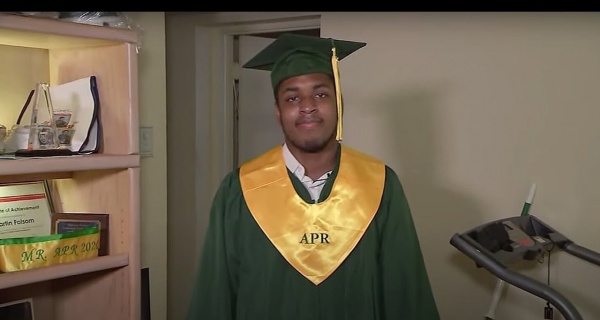 A Florida teenager graduated at the top of his class despite being homeless multiple times.

Since he was a child, Martin Folsom and his mother Melva have been in and out of homelessness, according to Jacksonville television station WJXT.

Despite all the challenges he faced through the years, Folsom managed to keep his focus on his studies — and his efforts paid off when he was named his class' valedictorian and graduated from Philip Randolph Career Academy in Jacksonville.

"It kind of gave me a jolt in my chest a little bit, so it was a good feeling," Folsom said in a video interview shared by KTRK. "It means a lot and it gives me a sense of all I've done and all I have accomplished was worth it."

Folsom and his mother became homeless while fleeing Melva's ex-husband, who has since been sentenced to 40 years in prison for murder, WJXT reported.

Within two years, the mother and son reportedly lived in different shelters across five states before setting in Jacksonville.

Then, while he was in high school, Folsom and Melva became homeless again — once while the teen was in 9th grade and again in 11th grade, according to the outlet.

During that time, Melva recalled desperately searching for a place to live with her son.

"Martin and I were in downtown McDonald's and literally had nowhere to go," she shared with WJXT. "I was on the phone calling people, calling organizations, and by the grace of God, we got into a shelter that day."

Even with an uncertain living situation, Folsom told WJXT that he didn't let that affect his studies.

"I never thought to myself, 'I can't do this anymore' or 'I'm done with this,'" explained the teen, who served as class president from freshman year through senior year. "It's always been, 'Well, it happened again and I've gotta keep myself up and keep moving forward.'"

"At my school, there are a lot of other smart people there too," he added. "And if I let myself slip, they would take it from me in a second."

That dedication and perseverance was something that Melva said she continuously instilled her son, even when times were tough.

"I just constantly kept pushing him to be better, and not necessarily to be No. 1, but to be better," she explained to WJXT.

In the fall, Folsom plans to attend Valdosta State University. Following his graduation from the Georgia university, he hopes to work for the FBI, according to KTRK.

For students who may be going through challenges of their own, especially amid the coronavirus pandemic, Folsom has one message: "Tell them to dream big," he told WJXT.

"Think about something that you really want," he continued, "and think about how good you're gonna feel once you accomplish that."