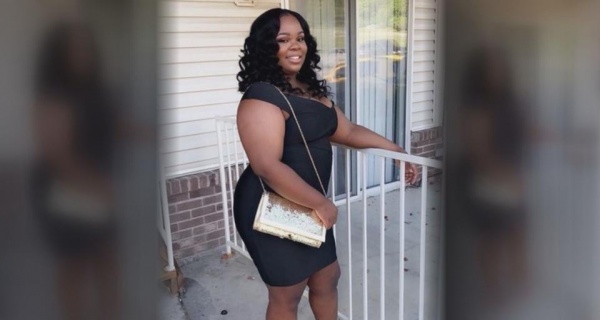 In the early morning hours of March 13, Breonna Taylor and her boyfriend, Kenneth Walker, were in bed asleep when they heard a loud banging at the door.

They called out, asking who was there, but heard no response, their attorneys say.

Minutes later, Taylor, a 26-year-old EMT, lay dead on her hallway floor, shot at least eight times by plainclothes officers who had burst in to execute a "no-knock" search warrant at her home.

What happened that night at Taylor's Springfield Drive apartment in southwest Jefferson County has sparked a national debate on the use of force and the shootings of unarmed black Americans by police.

Exactly what went down in the moments before Taylor died at 12:48 a.m. March 13 depends on who you listen to — there were no body cameras to record the events now under investigation by police.

Police say they entered the apartment when someone shot one of the officers, and they returned fire. They are pressing forward with charges against Walker for attempted murder of a police officer.

Walker's attorney says he acted in self-defense. How was he to know it wasn't an intruder if the police never identified themselves? And why was Taylor killed?

Using interviews, court records and witness accounts, The Louisville Courier-Journal, part of the USA TODAY Network, has pieced together the hours and minutes leading to that fatal confrontation.

Here's what know about the final fateful hours that cost Taylor her life.

On March 12, 12 hours before Taylor died, events were set in motion.

Jefferson Circuit Judge Mary Shaw signed the first at 12:25 p.m. for a "trap house" – or drug house – in the Russell neighborhood.

A confidential informant had purchased drugs at the home within the last two days, and Jaynes had observed what appeared to be drug deals the day before.

The second search warrant, signed by Shaw 12 minutes later, was for Taylor's home and car, 10 miles away at St. Anthony Gardens Apartments.

Taylor's name was on the second warrant, along with Jamarcus Glover and Adrian Walker, who also were named on the first warrant.

At 12:40 a.m. March 13, as Taylor and Walker were in bed asleep, police arrived at her apartment.

Despite having secured a "no-knock" warrant, the detectives knocked "multiple times" and announced their presence, Louisville police officials claim.

But neighbors told Taylor's attorneys that they never heard anyone identify themselves, and Walker's attorney says when he and Taylor called out, "there was no response."

When no one opened the door, detectives used a battering ram to force their way in, police documents say.

Attorneys for Taylor's family say that around the time police entered the home, Walker called 911, believing "that their house was being invaded." It's not clear if the call came before or after shots were fired.

A 'hail' of police bullets:

At 12:43 a.m., three minutes after the police arrived, Walker fired one round as the door burst in, allegedly striking Sgt. Jonathan Mattingly in the upper left thigh.

Bullets hit the kitchen, the living room ceiling, the living room window, the wall across from the window, and at least one adjoining apartment, Eggert claims based on a survey of the scene after the incident.

It appeared police "fired more than 22 rounds," he said.

They struck a clock on the wall, a blue cooking pot, a wooden chair, and a full-length mirror. They hit the ceiling and window curtains.

Bullet holes also were found in an adjacent residence, where a 5-year-old child and pregnant mother were present, according to a lawsuit filed by Taylor's family.

Taylor's sister, Jania Palmer, typically stays in the second bedroom. She wasn't there on March 13, but attorneys for both Taylor and Walker said Palmer could have been killed if she had been home.

The shots were fired inside Taylor's apartment, as well as from at least one officer who was outside and firing blindly into the home, according to the family's lawsuit.

"There was no way that the officers could have had a reasonable line of sight when firing into the home from outside this window," it says.

Crump has said police shot rounds "from everywhere: from the front door, from the windows, from patio doors. I mean, it was a volley of bullets from every direction."

At least eight of the rounds struck Taylor.

She died at 12:48 a.m., five minutes after police entered and Walker fired his gun, according to the Jefferson County Coroner's Office. Photos show blood in the hallway and on a wall with three bullet holes.

An audio recording made from the scene illustrates the chaos.

The calls go on to request EMS for the officer, and for SWAT to go to the scene.

"He's conscious," the caller says of Mattingly. "It looks like one in the thigh."

"We're going to put him in the back of our car," a different voice says about taking Mattingly to the hospital. "We don't know where our backup EMS that's on the scene is at."

By 1 a.m., Walker was arrested, charged with the attempted murder of an officer.

Another warrant at the 'trap house':

At the same time police entered Taylor's apartment, police officers across town were executing a separate search warrant at the "trap house" in the Russell neighborhood.

Glover had been previously picked up on drug charges, and he had drug trafficking and possession cases pending against him at the time of the warrants.

Police wrote in an affidavit attached to the warrant that they believed Glover used Taylor's home to receive mail, keep drugs, or stash money earned from drug trafficking.

Jaynes, the detective who requested the warrants, wrote in the document that Glover was seen walking into Taylor's apartment in January and leaving with a "suspected USPS package in his right hand," then got into his car and drove to a "known drug house" on Muhammad Ali Boulevard.

Jaynes said he verified through a U.S. postal inspector that Glover had been receiving packages at Taylor's address.

He also reported seeing a white vehicle registered to Taylor parked in front of the Elliott Avenue address – the main place where suspected drug dealing was occurring – on "different occasions."

Glover was arrested at the Elliott Avenue address at 2:43 a.m. March 13, his arrest citation shows. The time of his offense was listed as 12:40 a.m.

The police department obtained another search warrant for the same property five weeks later on April 21.

In it, officers write that after the March 13 raid, police had verified drug dealing had resumed at the property "by the end of March 2020."

A suspect or a victim?:

In a press conference on the police shooting hours later that same day, Lt. Ted Eidem with LMPD's Public Integrity Unit said officers were "immediately met by gunfire" when they entered Taylor's apartment.

Eidem named Walker as the suspect in custody for shooting Mattingly – who he said underwent surgery and was expected to make a full recovery. Taylor wasn't named.

Police were "still working through what her involvement was on the narcotics investigation," Eidem said.

His arrest citation from March 13 says he told police he was the "only person to shoot from inside the apartment."

Officials initially referred to Taylor as a suspect, though she was unarmed and had died.

In a subsequent search warrant for Taylor's home obtained less than three hours after the shooting, LMPD officers told a judge that narcotics detectives who entered the apartment that night returned gunfire "in the course of protecting themselves and other civilians."

The wording is an apparent reference to the Louisville Metro Police policy, which states the use of deadly force is authorized "in defense of oneself or another when the officer reasonably believes … that the person against whom the force is used poses an immediate threat of death or serious injury to the officer or to another person."

The policy adds that deadly force, like all uses of force, should not be used unless "other reasonable alternatives have been exhausted." And, if feasible, verbal warnings should be given before it is used.

It also states that officers firing their weapon "should remain cognizant" of the direction in which it's being discharged and the danger of discharging a firearm while moving.

The statement in the search warrant also incorrectly names Taylor as the "subject" armed with a gun who fired a shot that hit a detective. The detectives returned fire, it says, and "struck the subject unknown number of times."

"The subject collapsed inside the listed residence and subsequently (was) pronounced dead on scene," the document says.

But by the time Eidem spoke at the news conference, roughly 15 hours after the shooting, he identified Walker as the individual charged with attempted murder of a police officer.

No drugs were recovered from Taylor's home.