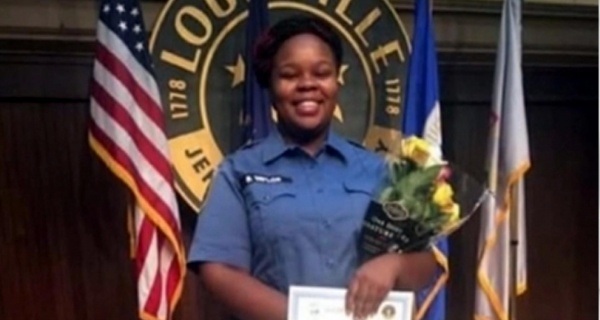 As national outrage continues over the shooting death of 25-year-old Ahmaud Arbery, a black man who was chased down and killed by two white men in a pickup truck while out jogging on a Sunday afternoon, another family is making a plea for justice. Breonna Taylor, 26, an EMT and aspiring nurse in Louisville, Kentucky, was shot eight times by police after they barged into her home in the middle of the night in March, in what her family is calling a botched drug-warrant execution. No drugs were found. And according to a lawsuit filed by Taylor’s family, the warrant in question targeted another person, who had already been detained by the time police entered Taylor’s home.

Like Ahmaud Arbery, Breonna Taylor was young, black, and unarmed; as with Arbery’s case, hers languished for weeks before attracting national outrage. Now, Taylor’s family has retained lawyer Benjamin Crump, who is also representing some of Arbery’s family members, in a lawsuit accusing police of wrongful death, excessive force, and gross negligence. “They’re killing our sisters just like they’re killing our brothers, but for whatever reason, we have not given our sisters the same attention that we have given to Trayvon Martin, Michael Brown, Stephon Clark, Terence Crutcher, Alton Sterling, Philando Castile, Eric Garner, Laquan McDonald,” Crump told the Washington Post. “Breonna’s name should be known by everybody in America who said those other names, because she was in her own home, doing absolutely nothing wrong.”

Taylor “had plans,” her mother, Tamika Palmer, said. “She had a whole plan on becoming a nurse and buying a house and then starting a family. Breonna had her head on straight, and she was a very decent person.”

Here’s what we know so far about Breonna Taylor’s case:

What happened to Breonna Taylor?

According to the Taylor family’s lawsuit, plainclothes police officers arrived at Taylor’s apartment at around 12:30 a.m. on March 13. Taylor and her boyfriend, Kenneth Walker, were asleep in a bedroom and woke up suddenly, believing that someone was breaking in. Police entered “without knocking and without announcing themselves as police officers,” the lawsuit says. (LMPD insists they “knocked on the door several times and announced their presence as police who were there with a search warrant.” The lawsuit contends that multiple neighbors gave statements contradicting this claim.)

“While police may claim to have identified themselves, they did not. Mr. Walker and Ms. Taylor again heard a large bang on the door,” Walker’s attorney wrote in a motion. “Again, when they inquired there was no response that there was police outside. At this point, the door suddenly explodes. Counsel believes that police hit the door with a battering ram.”

Taylor’s mother told the Washington Post that she had received a call from Walker, who said someone was trying to break into the apartment before shouting, “I think they shot Breonna.” According to his attorney, Walker fired a shot in self-defense and struck an officer in the leg. Walker is a licensed firearm carrier. In response, police opened fire, shooting more than 20 rounds into Taylor’s home, striking objects in the living room, dining room, kitchen, hallway, bathroom, and both bedrooms. Taylor was shot at least eight times, and was pronounced dead at the scene.

Walker was arrested and charged with assault and attempted murder on a police officer. Later in the month, he was released from jail on home incarceration. The officers involved in the shooting — identified as Jonathan Mattingly, Brett Hankison, and Myles Cosgrove — were placed on administrative reassignment pending the outcome of an investigation.

Why did police come to Taylor’s apartment?

The lawsuit raises questions about why police targeted Taylor’s apartment in the first place; her family maintains that it was a botched search-warrant execution. According to the Courier-Journal, Taylor wasn’t the main subject of the investigation that prompted police to enter her home. Records show that the narcotics investigation focused on a suspect named Jamarcus Glover, who was believed to be connected to a “trap house” more than ten miles from Taylor’s apartment. Police believed that Glover was receiving mail and keeping drugs or money earned from drugs at Taylor’s home, and a judge signed off on a search warrant that included Taylor’s address just before 1 a.m. on March 13. The warrant included a “no knock” provision, which allowed law-enforcement officers to enter Taylor’s house without identifying themselves; the “no knock” was deemed necessary because “these drug traffickers have a history of attempting to destroy evidence, have cameras on the location that compromise detectives once an approach to the dwelling is made, and have a history of fleeing from law enforcement,” according to police records.

But the Taylor family attorneys say that Glover, the main target of the investigation, was already “located and identified by LMPD prior to the warrant being executed at Breonna’s home.” “Breonna had committed no crime, posed no immediate threat to the safety of the defendants, and did not actively resist or attempt to evade arrest prior to being repeatedly shot and killed by the defendants,” the suit argues.

The Taylor family’s lawsuit is seeking compensatory and punitive damages, as well as legal fees through a jury trial. Louisville Metro Police Department spokesperson Jessie Halladay declined to comment on the case and said in a statement, “There is an ongoing public integrity investigation into this case and therefore it would be inappropriate for us to comment at this time.”

On May 12, Louisville mayor Greg Fischer finally commented publicly on the case, writing in a statement that the case was currently under investigation, and that he had spoken with the LMPD about “the need for a thorough investigation.”

A local councilwoman, Keisha Dorsey, said on Facebook that she is calling on prosecutors to drop all charges against Walker. She is also calling on Fischer to demand that LMPD create a clear policy on executing warrants and police identification, as well as for all police divisions to wear body cameras. The officers who executed the warrant at Taylor’s home, from the Criminal Interdiction Division, are not currently required to wear them.