5 Things You Didn't Know About The Honeymooners 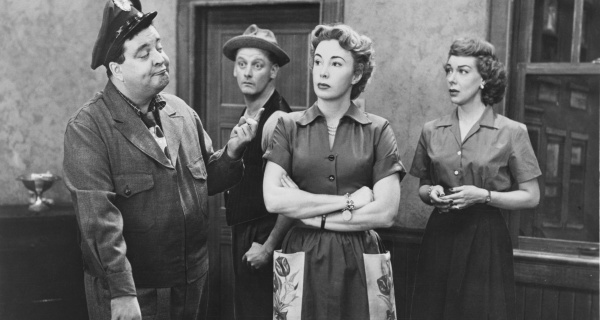 On May 9, 1971, the final episode of the sitcom The Honeymooners, starring Jackie Gleason aired on CBS. Think you're a Honeymooner fanatic? Here are five interesting facts you probably didn't know about the show...

Meadows Was Originally Rejected by Jackie Gleason for The Part:

Gleason rejected Audrey Meadows when she auditioned for the part of Alice because he thought she was “too young and pretty” to appear as his wife. Meadows refused to take no for an answer and returned home, put on an ordinary house dress, changed her hair, took off her makeup and had photos sent to Gleason. After one look, he said “That’s Alice!” and did not realize Meadows was the same pretty woman he had rejected the day before.

If you've ever watched the Jurassic-era cartoon, then you know they "borrowed" quite a bit from Gleason's Honeymooners. Two married couples living next door to each other? Check. Dopey husband with smart, down-to-earth wife? Check. Best friends who were both members of the same bowling team? Check. Gleason certainly took notice and briefly considered a lawsuit against the cartoon's creator before someone talked some sense into him by asking, "Do you really want to be the guy who killed Fred Flintstone?" Gleason dropped the idea.

Art Carney’s Father Was His Inspiration For His Character:

Ed Norton, the sewer worker played by character actor Art Carney, got his inspiration for the role from watching his father, who had a compulsion to go through elaborate rituals to perform even simple tasks. According to Carney, his dad couldn’t do anything as simple as signing his report card, which involved his father changing the desk lamp’s angle, moving items around, lining up the paper and checking his pen several times. Carney’s exaggerated movements and the obsessive-compulsive behavior of his character became favorites with the audience.

Only One of The Show's Stars Earned Residuals From The Series

Meadows almost didn't get the job because Gleason found her vivacious youth and beauty a bit too unrealistic for the wife of Ralph Kramden. But after tricking Gleason with some dressed-down glamour shots, she landed the role. When it came time to sign on the dotted line, she brought her two brothers—both attorneys—to the negotiating table. They insisted their baby sister get a clause for syndication residuals. CBS didn't have a ton of faith in the show and as a result, happily obliged. As a result, she was the only cast member still getting Honeymooners checks well into her old age.

Fans of The Show Sent Alice Decorations For Her "House.":

Gleason modeled the Kramden's apartment off the tenement where he grew up in Brooklyn. It was intentionally bleak—built to reflect a man of meager wages who also refused to use credit to decorate his house (unlike the Norton's next door). Fans of the show felt for Alice and as a result, sent hundreds of packages a week containing decorative linens and knick-knacks to help spruce up the Kramden homestead.