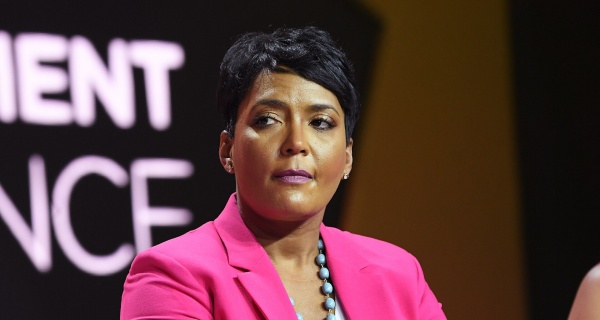 *'The rhetoric that we hear coming out of the White House in many ways, I think many who are prone to being racist are given permission to do it,' she said

The mayor of Atlanta said Sunday that Donald Trump's comments have emboldened those 'prone to being racist,' leading to an unarmed black man's death in February.

'The rhetoric that we hear coming out of the White House in many ways, I think many who are prone to being racist are given permission to do it in an overt way in a way we wouldn't [otherwise] see in 2020,' Keisha Lance Bottoms, a Democrat, told CNN's State of the Union Sunday morning.

'My heart goes out to the parents and the family and friends,' Trump said during a call-in interview with his favorite network.

A video of Arbery being shot and killed circulated social media last week and garnered massive media attention as the Georgia District attorney called for the case to be heard by a grand jury – and outrage ensued over a lack of arrest.

But the father-son duo Gregory, 64, and Travis, 34, McMichael, who are white, were arrested last week.

On Thursday, the McMichael were charged with murder over the death of Arbery - less than three days after cell phone footage showing the incident went viral on social media but more than three months after Arbery's death.

'I think had we not seen that video I don't think they would be charged,' Bottoms told CNN's Jake Tapper. 'It's heartbreaking. It's 2020 and this was a lynching of an African American man.'

Several celebrities and politicians have called the incident a 'lynching.'

Bottoms asserted that it is up to the Department of Justice to step in if the local legal system fails and 'make sure people are appropriately prosecuted.'

'But we don't have that leadership at the top right now,' she said of the Trump administration with William Barr at the helm of the DOJ. 'It's disheartening. I have four kids, three of whom are African-American boys. They are afraid, they are angry.'

White House Press Secretary Kayleigh McEnany was asked Friday during her press briefing whether the DOJ would get involved in the case.

She didn't rule out the possibility, but suggested it was a state matter.

A Justice Department spokesperson, however, told the BBC that the FBI is already assisting with the investigation.

'As is standard protocol we look forward to working with them should information come to light of a potential federal violation,' said the statement.