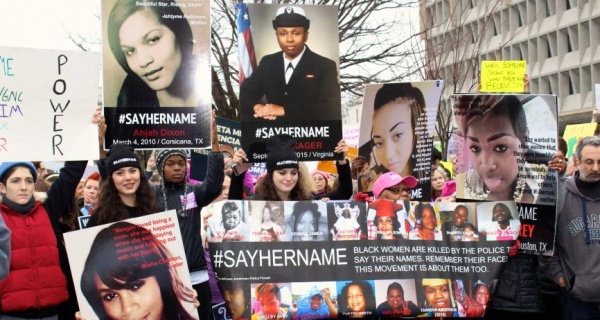 India Beaty, 25, and India Kager, 27, were killed in separate incidents last year by Virginia police officers, who will not face prosecution.

There are not even words, Vicki Mcadory says of losing her niece, India Beaty. On March 19, 2016, a year ago today, she was shot five times in the back by Norfolk, Virginia, police officers for reportedly holding a fake gun.

One year after India Beaty’s senseless death at the hands of the state, police violence against Black women continues to exist at the margins of public concern. While Black women make up just 13 percent of America’s female population, 33 percent of women shot to death by police are Black, according to the African American Policy Forum. Their stories point to devastating levels of dehumanization that must be included in efforts to combat state-sanctioned violence against Black Americans. A year after her death, Beaty’s family has seen no measure of accountability for the officers who killed her, and her story has been largely ignored by mainstream media news outlets.

Strategies to resist anti-Black state violence must be inclusive and intersectional; this is more urgent than ever under the politically hostile climate we face in Washington under Donald Trump’s presidency. Just as we rally around the killing of a young, college-bound Black man like Mike Brown, we should rally around the police shooting of India Beaty––a young, Black, lesbian hip hop artist, who brought laughter and music to those in her life.

“Black women experience police brutality, both in similar ways to the brothers in our communities, and in ways that are specific to Black women — yet they are often forgotten,” explains Kimberle Crenshaw, executive director of the African-American Policy Forum and law professor at Columbia University and UCLA. “They are left off of posters, out of meetings, and it isn’t simply because people don’t care about Black women, but we struggle to see them in our racial justice battles––and our feminist ones.”

To combat the erasure of Black women from struggles against state violence, AAPF launched the #SayHerName Campaign in May 2015. #SayHerName has brought together family members of Black women killed by police to heal, share testimony, and build political power and organizing skills to call attention to the injustices their loved ones experienced.

“Becoming involved with the other mothers, with Kimberle Crenshaw and the Say Her Name program, it not only has been a comfort, it saved my life,” says Mcadory. “To realize that I’m not crying just for myself, that gives a sense of power.”

Through #SayHerName, Beaty’s aunt and mother were connected to Gina Best. Nearby, in Virginia Beach, Best’s daughter India Kager was fatally shot by police on September 5, 2015, months before Beaty.

“Like so many mothers, we birthed our children, we labored in their births, and now we labor in their deaths. That pain is inescapable,” Best says. “Sharion Overton, India Beaty’s mother, calls me at three in the morning, and we just sit there and cry. We don’t need to talk, we just cry.”

In both these cases, where both women are unarmed, they are taken from us – and the state sees them as collateral damage in service of protecting the police/public, says Cherrell Brown, community engagement director at AAPF.

“Black women have been collateral damage both in terms of the state, and often in our movement struggles.” AAPF’s report, “Say Her Name: Resisting Police Brutality Against Black Women,” provides an analytical framework for understanding what happened to Black women like Beaty and Kager.

“India was an amazing, funny, incredibly loving person. It’s just the truth about her,” recalls Mcadory. “She was always a clown, she was that person who would make you laugh at a funeral. She was my little best friend. She was my joy.” Beaty was launching her career as a rap artist at the time of her death and was parenting her long-term girlfriend’s five children.

Beaty’s life was cut short by those sworn to serve and protect her life. Plainclothes police officers, responding to an argument that erupted between two men in the parking lot where Beaty was parked, came upon her from behind. While there are contradicting accounts of exactly what transpired, what is clear is that within seconds of their arrival, police officers opened fire, shooting Beaty five times in the back and ending her life.

Officers claimed that Beaty was holding a gun in her hand, which they later realized was fake. Yet her family disputes this account. Mcadory reports that a witness at the scene said that Beaty was holding her cell phone. She did have a replica gun in her car for a music video she was working on, but Mcadory believes there is no reason she would have taken it out of the car. In January 2017, the Norfolk Commonwealth Attorney’s Office announced that no charges would be leveled against the officers who killed Beaty.

Twenty-seven-year-old mother India Kager was in a parked car with her 4-month-old son and his father when Virginia Beach police officers opened fire on the car, releasing 30 rounds and killing both adults. Her baby, Roman, survived the shooting. Kager had another son, Evan, who was four when he lost his mother. Best, describes her daughter as “a beautiful soul” who was “very supportive, contemplative, highly gifted and extremely articulate.” Kager attended Duke Ellington School of Arts in Washington DC, where she focused on visual arts. She was a navy veteran and after her service attended art school in Virginia. She came from a family of police officers.

The Virginia Beach Police Department later claimed that Angelo Perry, the father of Kager’s child, was a “person of interest” in a homicide investigation and that he pulled a gun on the officers when they approached the car. However, the police department has never claimed that Kager was armed or a suspect in any investigation. Police had been tailing the family’s car before the shooting, so Best believes they must have known that an unarmed woman and her infant child were in the car.

On March 8, 2016, the Virginia Beach Commonwealth’s Attorney Colin Stolle announced that no charges would be leveled against the officers who killed Kager. “This was excessive force by any stretch of the imagination,” says Best. “The officers had three hours when they were surveilling them. They saw India get out of her car. They saw my daughter holding the car seat. No one made a life-saving decision to protect India and the baby.” (Colin Stolle’s brother, Kenneth Stolle, is the current Virginia Beach Sheriff and a former Virginia Beach Police Officer, which raises questions about impartiality.)

For the mothers who lost their daughters to police violence, the pain and complete lack of accountability they witness every day are inescapable. “I go in the closet to cry so my youngest daughter doesn’t hear me,” Best says. “But then when I hear her crying, I have to go in there and be with her.”

“It’s something that I have nightmares about every night. I’m still traumatized by it. I was right down the street from where she got killed,” says Overton. “My belief is that India is asleep in her death and that soon I’ll see her again.”

“#SayHerName is about exposing the erased experiences Black women have with racialized state violence, like those of the two Indias,” says Crenshaw.

“We need to continue to expand the frameworks by which we understand these tragedies to happen. The ways in which gender intersects with race, often compounded by class – to create particular struggles faced by cis and trans-Black women being harassed, sexually assaulted, misgendered and forgotten.” As we move into the next four years of a presidential administration bent on marginalizing those already at the margins, it is critical that we shed light on stories like those of the two Indias and place them at the center of our advocacy and activism. We need a movement for justice that includes all of us.

You can support Gina Best’s GoFundMe campaign, which she launched to prevent foreclosure of her home.

You can support the #SayHerName Movement by making a tax-deductible donation to the African-American Policy Forum HERE and help erase the invisibility of Black women killed by police with #SayHerName apparel.

Rachel Anspach is a journalist, activist and intersectional feminist living in Brooklyn. She is the former senior writer/editor at the African American Policy Forum and co-author of “Say Her Name: Resisting Police Brutality Against Black Women.”