Contractor Demolishes The Wrong Home, For The Second Time 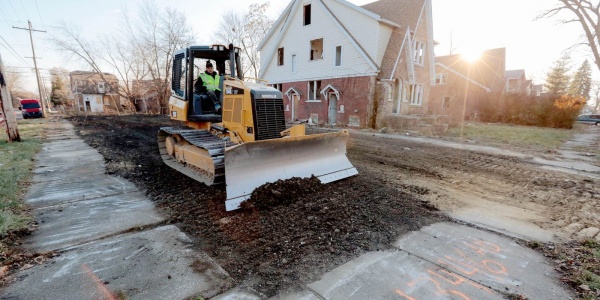 The largest contractor in Detroit's demolition program is facing suspension again after it tore down the wrong house — for the second time in about 18 months — the Free Press has learned.

Detroit-based Adamo Group has been awarded more than $58.6 million to perform thousands of federally funded and city-funded demolitions since 2014. The company also has performed several large-scale, high-profile demolitions, including fulfilling the $5.9 million contract to tear down the former Joe Louis Arena.

City officials confirmed Adamo tore down the wrong house and the company received a violation notice Wednesday morning for the wrongful demolition. The contractor has seven days to appeal.

"In a case such as this, DBA policy calls for a minimum 90-day suspension from bidding, Adamo was suspended for 90 days in May 2018 for a similar offense," Detroit Building Authority Special Projects Director Brian Farkas said in a statement to the Free Press. "It is standard DBA policy that if a contractor has no other violations for one year after a suspension, that offense will not be considered again if a new violation occurs. "

Adamo was awarded a $25,201 contract to demolish a fire-damaged house at 14461 Alma on June 18. On Nov. 22, Adamo instead tore down the structure at 14661 Alma. Both are Detroit Land Bank Authority-owned structures.

The property was located one block over from the home it was actually contracted to demolish.

The company, however, did not notify the city or state until last week.

"On Dec. 10, the contractor notified the Detroit Land Bank of the wrongful demolition," Farkas said. "The Detroit Building Authority was notified on Dec. 11 by DLBA staff and the DBA immediately notified the Michigan Department of Environment, Great Lakes & Energy."

With the exception of emergency demolitions, contractors are required to properly abate or remove any potential asbestos-containing materials from homes prior to demolition.

Michigan Department of Environment, Great Lakes and Energy spokesman Nick Assendelft confirmed Wednesday the demolition is under investigation by the state.

Assendelft said the company and the Detroit Building Authority "self-reported the demolition last week to EGLE."

When asked whether EGLE was at all concerned about this happening again or the quality controls in place within the program, Assendelft said: “EGLE is concerned when a house is mistakenly demolished."

"Because there was no asbestos survey, it is unknown if the house contained asbestos," he said. "However, according to EGLE’s investigation, 14461 Alma was handled as an ‘asbestos containing demolition’ and was demolished using asbestos-trained workers and by wetting the structure during demolition.”

EGLE can hold both contractors and the property owner equally responsible for potential asbestos violations. It wasn't immediately clear if the company received any EGLE violations for the previous wrongful demolition.

Farkas confirmed no asbestos survey had been conducted on 14461 Alma prior to the demolition but he said "standard environmental procedures were followed."

"The structure was wetted for five minutes prior to the knockdown and water also was sprayed to envelop dust during demolition," Farkas said.

However, the incident sparks fresh concerns about quality controls in place within the city's demolition program, which has had a series of highly publicized contractor errors and environmental concerns since Mayor Mike Duggan first began his aggressive effort to remove residential blight from Detroit.

Ironically, the incident happened three days after the Detroit City Council voted down Duggan’s $250 million bond proposal last month to tear down thousands of homes across the city through 2025. Council members who voted against the bond cited an ongoing lack of transparency within the program and quality controls in place to prevent contractor errors and other environmental concerns.

Sources have told the Free Press they expect a similar bond proposal to be brought back before council sometime in 2020.

In September, Detroit Police began an investigation regarding the mysterious demolition of a house owned by Michigan state Rep. Sherry Gay-Dagnogo. Although police announced a suspect in that incident, why and how the house was torn down with no record of who did it is still unclear.

The recent wrongful demolition also comes on the heels of scathing Detroit Auditor General Report that concluded in November the city's demolition program has been mismanaged and beset with significant problems for the past four years. City officials have disagreed with the auditor's findings.

Adamo previously tore down the wrong house in May 2018. In that instance,the home that was slated to be demolished was right next door.

"Any time one of our demolition contractors commits a serious violation, we act immediately to address it," Farkas said in a statement to the Free Press last year. "In this instance, an Adamo Construction crew informed us that it had mistakenly knocked down a Land Bank-owned house at 5792 Holcomb that was also in the demolition pipeline but not the house under contract for demolition. The property it should have knocked down was next door."

That house actually demolished was not abated, raising concerns about potential asbestos exposure. It was never made clear, however, whether asbestos was present at the property.

The Free Press previously reported Adamo was suspended for a 90-day period for tearing down the wrong home last year but its owner, Richard Adamo, was allowed to continue serving on the city's seven-member Board of Examiners for Wrecking Contractors, which makes recommendations for awarding wrecking licenses. The board also doles out punishment to contractors for violations.

With the company being suspended for a second time, it's unclear what impact Adamo's suspension could have on his board appointment.

David Bell, director of Detroit's Buildings Safety Engineering Department, told the Free Press last year he takes the board's recommendations and makes a final decision on granting licenses or suspensions. The city also reiterated at the time that the board has been in place since 1964 and he had never heard any concerns about the board's makeup.

When asked in 2018 whether he thought Adamo should step aside during the remainder of his suspension, Bell said: "I can't really speak to his suspension. ... I have to look at it further. It might be that it's not relevant. I've got to look into it."

Several contractors have previously gotten in trouble for a variety of issues within the program. In June 2016, the state cited one former company within the city's demolition program, Brown Environmental Construction, for tearing down multiple houses before the asbestos could be removed.

The agency said at the time that asbestos-containing material was "evident throughout the construction debris pile and on the surrounding property" and the debris was dry and "not contained," a requirement designed to keep fibers from becoming airborne. That company was eventually permanently removed from the program and is still not allowed to bid.