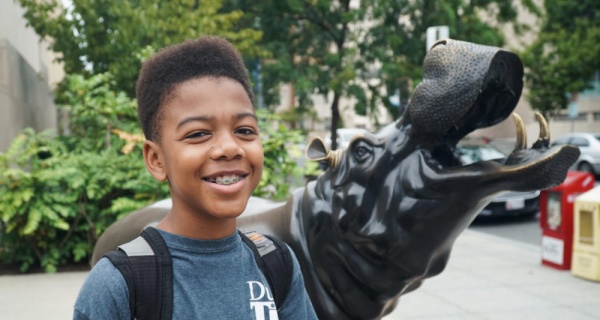 Black teenagers across the country are reaching new heights in academia and making history in the process. Months after 14-year-old Sydney Wilson became the youngest student to be admitted into Spelman College, a Washington, D.C.-based teen has hit a major milestone. According to The GW Hatchet, 14-year-old Curtis Lawrence is one of the youngest students to attend George Washington University full-time.

Lawrence attended a magnet school on the university’s campus called School Without Walls. The school allows high school juniors and seniors to take college courses at the university so that they can earn both a diploma and an Associates of Arts degree. Lawrence was selected to participate in the Associate of Arts Cohort that provides 15 sophomores from the school with the opportunity to earn a degree.

Lawrence’s parents were aware that he was gifted from an early age. At 2-years-old he learned how to read and started studying science and math. He skipped several grades during elementary school and middle school and was homeschooled during eighth grade. He then went on to attend School Without Walls which led him to the GW Early College Program. Lawrence plans on fully immersing himself in on-campus activities. He is a member of the African Student Association, the Black Student Union, and the Caribbean Students Association. He’s currently taking courses centered on African history, astronomy, calculus, and geology.

“I feel like I was prepared for the academics because Walls is a very rigorous high school, it’s the top high school in D.C., so a lot of the work that we did reflected the work that I’ll be doing here in college,” Lawrence told the news outlet. “Most of the high school experience is replicated at GW for me in some kind of way.”

After completing his associate degree at George Washington University, he plans on studying computer science at Florida A&M University.