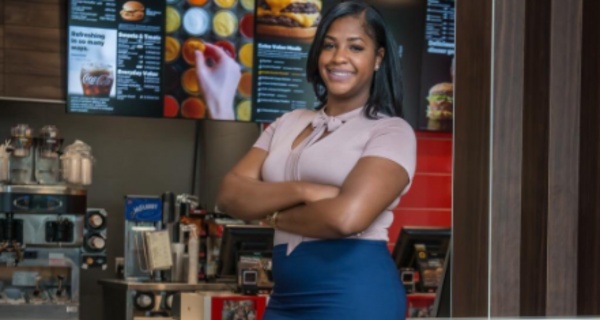 Jade Colin, 28, became the youngest Black woman to own a McDonald’s franchise in 2016, reports The Black Professional. The New Orleans native was introduced to franchise ownership when her parents bought their first McDonald’s eight years ago.

In 2012, Colin graduated from the University of Louisiana at Lafayette with a degree in business management. She began to work in the restaurants learning policies and procedures. The businesswoman later joined the company’s Next Generation program, designed as a preparatory program for the children of McDonald’s franchise owners.

During the first year of the program, Colin received the Outstanding Restaurant Manager of the Year Award for her region. The following year, she was honored with the Ray Kroc Award, which recognizes the top 1 percent of restaurant managers in the country. After completing courses at Hamburger University, which trains students in restaurant-management skills, Colin, then 26, opened her franchise.

“My business is truly a blessing. It was never something I would have ever thought I would be doing,” she said.

Colin advises people to take risks and be prepared for the hard work that comes with being an owner: “Take the risk and know that it will be a lot of hard work. Pray about it. God sends everyone on a different journey in life. As you build your relationship with Him he will help lead and guide you in the right direction.”

The franchise owner credits her parents, who now own six McDonald’s restaurants, as her biggest inspiration. She is also aware of how vital mentorship has been for her budding career. “Network and have a core team of genuine mentors. You need people who are in your corner that will positively motivate you. I say genuine because not everyone will have your best interest at heart.”

Colin is still the youngest franchise owner two years after opening her location.