Happy Ending: Cat Reunited With Owner After Missing For 11 Years 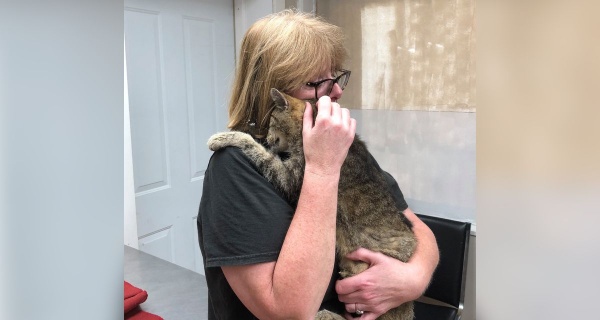 Carol O’Connell had been wooing a stray cat for at least three years. The feral animal would swing by once in a while, and she finally was able to coax it into being petted.

O’Connell, who works for the Dutchess County Society for the Prevention of Cruelty to Animals (SPCA) in New York State, had a hunch. She borrowed a scanner from the shelter and found to her surprise that the cat had been microchipped.

The computer chip yielded information about the owner and her location. Lo and behold, the cat had been missing for 11 years.

When the feline’s family had last seen him, he’d been practically a kitten.

That situation was remedied, though the shelter did not divulge where the cat was from.

“Yesterday Tiger had a reunion with his mom Maggie, after getting checked out by DCSPCA clinic director Dr. Crum,” wrote the Dutchess County SPCA in a Facebook post. “He was in remarkably good shape for having been on the streets that long, and today he is back with his family whom he had not seen since he was 3 years old!”

DCSPCA staff member Carol O'Connell did an amazing thing! It took her three years to get close enough to pet the stray...

A good 15% of cat owners lose their pets during the course of any given five-year period, according to a 2018 study in the journal Animals by the National Center for Biotechnology Information. Many are never found.

“Missing pet cats are often not found by their owners, with many being euthanized at shelters,” the center said.