What Foods Are Considered 'Processed' Foods? 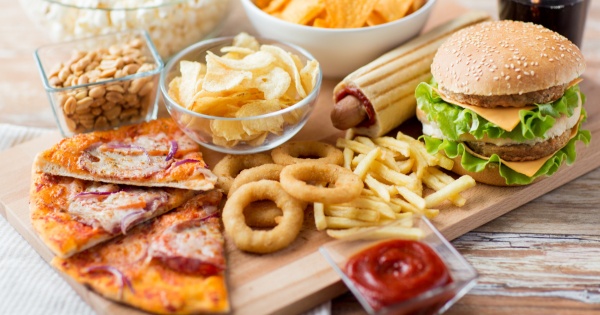 "I actually don't eat processed foods." You hear it fly out of your mouth during a cocktail party conversation and just as it does you realize you have very little idea of what that actually means. Even if you haven't said it out loud, surely you've heard the phrase and in an effort to "get healthier" tried to cut down on processed foods. But what exactly does the term mean and are processed foods as bad as they've been billed to be? Should you just simply avoid them altogether, and if so, how? Answering the first of those questions might help us figure out the rest.

What are processed foods?

"Processed foods" implies an enormously large umbrella and encompasses any food that has been altered in any way prior to sale or consumption. The International Food Information Council qualifies the processing of food as "any deliberate change in a food that occurs before it's available for us to eat ... as simple as freezing or drying food to preserve nutrients and freshness, or as complex as formulating a frozen meal with the right balance of nutrients and ingredients."

This can be complicated to navigate since there are a thousand and one ways to modify foods, from the drastic to the most basic including ancient techniques -- like drying and fermenting -- to more modern, chemical and biological modifications with new ones being developed all the time. Foods are also modified for many different reasons, from improving taste and visual appearance to extending shelf life but also some unexpected reasons you might not associate with processing -- ones which can actually be quite good for you.

Note: For the purposes of this article, we'll not discuss genetically modified foods or "GMOs," which have been altered before growth at a molecular level and pose a separate series of questions and concerns.

The few completely unprocessed foods -- the ones you've been telling yourself to eat as much of as humanly possible -- are a fairly small list of fruits and vegetables, meats, nuts, seeds, and a few other foods that are consumed essentially as they were when they left the earth, tree, vine, pod, shell, sea or slaughterhouse. So a better question to think about (and ask yourself) as you stroll the aisles of the supermarket is not "is it processed?" but rather "how processed is it?" and also "how is it processed?" Speaking very generally, the less processed the better, but with a few important caveats.

How processed is a food?

Some minimally processed foods like bagged vegetables, fresh fruits, plain rice and grains, salad greens, seeds, nuts, and roasted coffee beans are technically processed, but in innocuous ways like simply cooking, grinding or preparing them simply for in-store and at-home convenience. These are processed for your benefit -- cleaned, cooked or cut for safety and ease.

Slightly more heavily processed foods, like boxed crackers or frozen fruits, vegetables and legumes, may have some added preservatives, but the effect is often minimal as most basic packaging and freezing processes are effective and relatively noninvasive. Canned foods are not as simple to navigate, as they generally include more ingredients. Canned peaches, for example, are often sitting in a corn syrup-based juice, while many other canned vegetables and soups are full of nitrates and preservatives. There is also the presence of BPA, an industrial chemical found in the metal of some food cans that has been linked to serious health problems. Remember that all canned and frozen foods will experience some loss of nutrient, so fresh is always better if it's possible.

More processed foods include those modified for taste and appearance with sweeteners, flavoring agents and, of course, preservatives. These include many bottled sauces, salad dressings, and spice, batter and gravy mixes. This more complex category is one that requires you to read and research specific ingredients so you know what you're putting into your body. A general rule of thumb is the fewer ingredients, the better -- and remember, they're listed in descending order from the most prevalent ingredient (by sheer volume) to the least. The hard-to-pronounce ingredients are often chemical fillers, sweeteners, colorants, nitrates, antibiotics and other preservatives. Most nutritionists would urge you to avoid where possible.

Bread and baked goods are one category of food that runs the gamut from extremely highly processed to not much at all and consumption should be carefully considered. Bleached white bread and rolls, like Wonder brand, are often highly processed and preserved, obliterating most nutritional value, while more natural brands, such as Arnold and Bread Alone, still may contain some preservatives, but not nearly as many. Watch out for fillers and sweeteners like corn syrup or even less scary-sounding honey and agave, which are unnecessary. Again, read the ingredients; the fewer total and the more you recognize, the better.

The worst (and most) processed foods often come via a Trojan horse of convenience and include most ready-to-eat, frozen or prepackaged food, mixes, soups and other meals. The more complicated the food, the more tampering likely had to be done for it to remain edible and tasty. This means most frozen pizzas and microwavable TV dinners, as well as complex packaged desserts with filling and frosting, like Twinkies and Pop-Tarts.

Most store-bought bacon, hot dogs and prepackaged deli meats are also highly processed and loaded with nitrates to stop the growth of bacteria -- so much so that they are classified as carcinogens by some standards. This classification does not apply across the board and some newer food brands like Amy's Kitchen have found ways to make and distribute prepared and frozen foods without the heavy use of chemical preservatives. The proof is always in the packaging, so read, read and read some more.

Another thing to look out for are "low-fat" "sugar-free" and other "diet" foods which are often processed at a higher rate than others, and many times in an unhealthy way. Consider that if a food is billed as "low-fat," that means fat (taste) was removed from the original product and it has likely been either chemically altered or contains a bevy of flavor additives to make up for the loss of flavor. More often than not, this means sugar, which is arguably worse for you than the original fat that was removed. On the flip side, many low-sugar or low-carb foods are fortified with alternative chemical sweeteners, which range from the highly chemical (aspartame and saccharine) to the more naturally derived (stevia and monk fruit).

While the term "processed food" certainly carries a negative connotation, many foods are processed to improve or fortify their health benefits and overall nutritional value. Certain bread products and granolas are fortified with fiber or riboflavin, for instance. Milk, juices, drinks and yogurts often get a boost of calcium or vitamins that have varying degrees of positive impact on health.

Pasteurization is another common form of processing particularly for juice, milk and milk byproducts such as cheese and yogurt. It uses heat to eliminate potential harmful pathogens and extend shelf life. Pasteurization does not rely on heavy additives like other preservation methods and serves as another example of food processing that shouldn't concern the average person.

In general, the term "processed foods" should not be something to scare or stop you from buying or eating something, but if you suspect or discover something has been heavily processed, for any reason, it would be wise to consider both the means for and the process by which it was altered before buying. When it comes to food, as with almost anything else, knowledge is power.