Jay Z Explains His New Role With The NFL 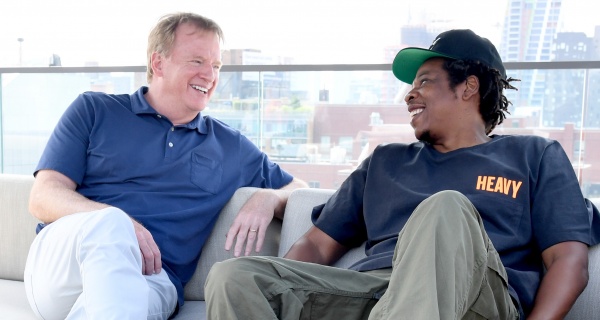 Jay-Z wants to change the “fractured” process of choosing the headliner for the Super Bowl halftime show. He has been discussing how he will choose which artists to approach for the performance.

The “99 Problems” hitmaker will be producing the entertainment extravaganza as part of the agreement his company Roc Nation has made to be official Live Music Entertainment Strategists for the NFL. He thinks too many artists have been upset in the past because the shortlisting wasn’t “definitive” enough.

He said: “You take four artists and everyone thinks they’re playing the Super Bowl, it’s almost like this interview process.

“And so I pick Chuck, the other three people get upset. So, that’s not even good math. After three years, nine people upset and three people played. … I think the process should have been a little more definitive. … You speak to someone and you let them have it and you move on. And I think then let the artists be artists.”

Next year’s NFL championship game will take place at the Hard Rock Stadium in Miami Gardens, Florida, and Jay wants to “speak to the community” before approaching artists to perform.

Asked in a press conference if Jennifer Lopez, Enrique Iglesias, and Pitbull — who have strong ties to Miami — could headline, he replied: “Not in those terms. We had this conversation, you can’t go to a city, plop a showdown and then leave. Like, at least speak to the community.

“Speak to the guys that’s on the ground organizing things and trying to make things better, in that sort of way.

“So, I don’t want to be running into that problem. Sometimes it may happen and it may wind up that the person is from the city that they perform, but you don’t want to get in that space ’cause then, again, who performs in Tampa?”

This year’s show was headlined by Maroon 5 with appearances from Travis Scott and Big Boi, but Jay couldn’t understand why the “Sicko Mode” hitmaker wasn’t topping the bill in his own right.

He said: “Nobody asked about it, but my problem with Travis Scott wasn’t about him not playing football. My problem was that he had the biggest year to me.

“Last year, he had a monster record — ‘Sicko Mode’ — and he’s playing on a stage with an M on it. I don’t see any reason for him to play second fiddle to anyone that year and that was my problem.”