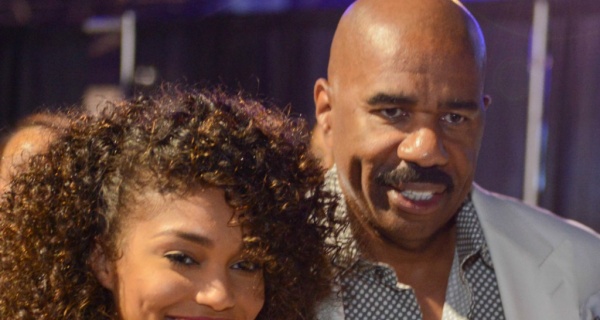 Steve Harvey's stepdaughter Lori Harvey has found herself the subject of headlines recently after she has been seen on multiple occasions with rapper Sean "Diddy" Combs on vacation, with the two rumored to be dating.

Lori was photographed with Combs while on a family vacation on Italy, with photos of the 22-year-old with her arm around the rapper while getting lunch with Steve and his wife, Marjorie, sparking speculation that the two are more than family friends.

Weeks prior, Lori and Combs, 49, had been spotted on walking in the Soho neighborhood of New York City in matching outfits. They have also been seen at other events including a dinner in Malibu, E! News shares.

Who is Lori Harvey? Here are five facts:

Her mom is Marjorie Harvey.

Marjorie is Steve's third wife, with the couple having married in 2007 after first meeting in 1990. Together, they're raising seven kids — Marjorie had three children from a previous relationship and Steve has four biological children from his first two marriages.

Lori allegedly dated Combs' 25-year-old son Justin, according to TMZ. The two were seen partying together at The Official Big Game Takeover, an event hosted by Combs, in February. Lori was previously engaged to Dutch soccer star Memphis Depay and has been linked to Trey Songz and British Formula One racing driver Lewis Hamilton.

The 22-year-old is signed to LA Models and Select Model Management in Europe. She walked for Dolce & Gabbana during Paris and Milan Fashion Week and was cast in an ad campaign for the brand.

She was an avid equestrian.

Lori grew up between Atlanta and Chicago and started riding horses at an early age. After suffering a riding accident during a competition in Lexington in 2015 and decided to give up competing.

"I wanted to be a professional equestrian," she told Vogue. "But I got injured badly a few years ago, so now I only ride leisurely."

The talk show host's daughter boasts 1.2 million followers on Instagram and has done numerous sponsored posts for brands in the past including Pretty Little Thing, Sephora, NyQuil and TRESemmé.