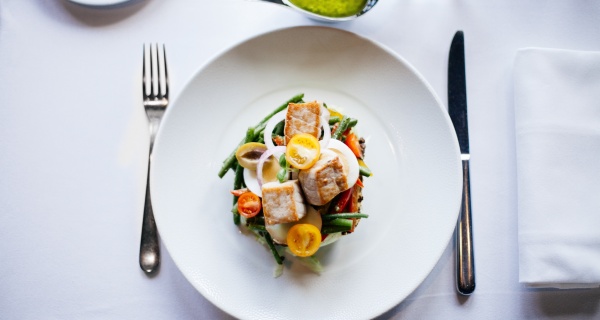 Dinner in the afternoon may be key to a slimmer body.

A form of intermittent fasting that requires people to eat all of their meals earlier in the day appears to be a “powerful strategy” for reducing hunger and losing weight, a new study has confirmed.

It does so by curbing appetite rather than burning more calories, researchers reported Wednesday in the journal Obesity. A longer fasting period also prompted obese people to dip into their fat reserves, leading them to burn more fat, said Courtney Peterson, the lead author and an assistant professor of nutrition sciences at the University of Alabama at Birmingham.

“When we’re trying to design weight-loss programs for people, if we can find strategies that either make it easier for people to cut more calories or to burn more fat, that’s a huge win,” Peterson told TODAY.

“If we can find ways to lower that hunger, people are more likely to be more successful with weight loss and keeping it off.”

The study compared how people’s bodies responded to eating three meals a day, but on two different eating schedules:

*Early time-restricted feeding — the intermittent fasting strategy — which only allowed participants to eat during a six-hour window between 8 a.m. and 2 p.m.

*Typical American mealtimes, which allowed eating during a 12-hour window from 8 a.m. to 8 p.m.

Eleven overweight and obese adults were randomly assigned to follow one of the schedules for four days, then the other for the same amount of time. They ate the same number of calories per day — enough to maintain their weight — on both plans.

After each regimen, the participants spent a day in a respiratory chamber that measured how many calories, carbohydrates, fat and protein they were burning. They also rated how hungry or full they felt every three hours, while blood tests measured their levels of hunger and satiety hormones.

It turned out those who were fasting for 18 hours a day and finished eating by 2 p.m. had lower levels of the hunger hormone ghrelin and higher levels of the satiety hormone peptide YY. Early time-restricted feeding also tended to lower people’s desire to eat and boosted their fullness across the day, though it didn't affect how many calories they burned.

In another benefit, the fasting regimen appeared to boost metabolic flexibility, or the body’s ability to switch between burning carbs and burning fat for fuel. That’s an important finding because obese people often have trouble burning fat, Peterson said.

Previous research has found the 16:8 diet, where people fast for 16 hours a day, but are free to eat whatever they want in the other eight hours, helped obese individuals lose weight and lower their blood pressure.

“This study helps provide more information about how patterns of eating, and not just what you eat, maybe important for achieving a healthy weight,” said Hollie Raynor, professor of nutrition at The University of Tennessee, Knoxville, in a statement. She was not involved in the research.

The authors can’t for certain say whether the appetite-lowering effects are coming from timing meals to the body’s internal clock — which provides peak blood sugar control and energy to digest food in the morning — or the extended fasting, Peterson said. Her best guess was that they were primarily produced by the extended fasting.

Peterson herself follows a similar eating schedule: “I feel a little blissed out when I do it. I can’t explain why,” she said.

Tips for trying it yourself:

People who are “hyper-motivated” can try a six-hour eating schedule that ends at 2 p.m., but researchers believe an eight-10 hour eating window that ends between 4-7 p.m. is a much more realistic target, Peterson noted.

When she asked people how they tolerated the 8 a.m. to 2 p.m. plan, they told her the fasting period wasn’t that bad, but the difficult part was stuffing all of the day’s calories into six hours. “They felt so full — they said it felt like eating Thanksgiving dinner every day,” Peterson said.

Women, in particular, might need to do a slightly shorter fasting period because they start to burn through fat a little faster than men, so it may be a bit more difficult for women to follow a super-long fast, Peterson added.

It takes your body and hunger patterns about two weeks to adapt to new schedule of eating. “In the beginning, it may be a little bit more challenging… but after you get over that hurdle, it should be easier,” she noted.