Madonna Says She Was 'Starstruck' When She Met Obama 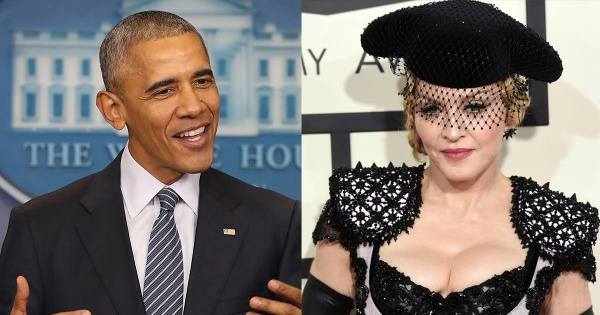 Following the release of her 14th album, Madame X, Madonna appeared on The Tonight Show on Thursday where she spoke with host Jimmy Fallon about how nervous she was meeting former President Barack Obama on his show.

"That is probably the most nervous I've ever been in my life. I had butterflies in my stomach. I was completely and utterly starstruck. I was gagging," the singer said as she recalled meeting Obama.

Fallon then proceeded to recall the funny encounter, explaining that though Madonna was nervous, Obama seemed unfazed to meet the singer. "He probably didn't even know me," Madonna said after Fallon mentioned that all Obama said was "nope" when questioned if he had ever met the singer.

Fallon then joked how Madonna acted nervously and "flirty" with Obama, whereas he kept things "presidential" and shook her hand. Despite being a funny encounter, Fallon mentioned the one moment that stuck out to him the most.

"You said, 'You're the only reason I'm doing this show,'" Fallon reminded Madonna of what she said at the time, which she confirmed. "I'm sorry the truth hurts!"

She went on to explain that she isn't facing any "distractions" or "illusions" for her current visit and she was only there to see Fallon.

Approaching her 60th birthday in August, the singer is showing no signs of slowing down. She recently performed two songs at the Eurovision Song Contest in Tel Aviv and will have a residency at The Palladium in London in 2020.

Madonna also confirmed that she will only be touring small venues for her Madame X tour. "I want to do something different. You have to keep changing, that's what life is all about," she said.

"I'm gonna only play small theaters, and I'm gonna stay in one city for long periods of time," she continued. "I'm gonna get to know people. I'm gonna look into their eyes. I'm gonna sit in people's laps. I might even tell a few jokes."

Fallon later asked the singer to teach him and the audience how to correctly do the cha-cha dance. The segment was inspired by her Maluma collaboration, "Medellin," which features the phrase "cha cha cha" in it frequently.

Madonna and Fallon made their way to center stage before the singer lifted up her dress and talked the host through each move. Once Madonna taught everyone the moves, the singer and host moved closer to the audience so that they could all dance together.

Earlier in the appearance, Madonna competed against Fallon in a neon dance battle. Dressed in a glow-in-the-dark jumpsuit, the host explained that The Roots would play a beat and they would each take turns showing off their best dance moves.

Madonna went first and earned a loud round of applause from the audience, though Fallon received the same enthusiasm from the crowd.

Following Madonna's second dance, Fallon declared, "That's not fair." In an attempt to beat the singer, Fallon energetically danced and concluded the number with a split jump. "That was not bad. That was a game-changer," Madonna told her competitor.

The two danced together for the final round. "I hope you stretched out your hamstrings," she told Fallon as she led him in a dance move that featured their legs quickly moving back and forth. The performance included choreographed moves that they did together, as well as moments that they each freestyled.

After the game, the singer asked The Roots members if they were mad at her. "When we were dancing earlier, you looked like you were mad at me," she told the band's leader, Questlove. "I started to think that you didn't like my dance moves or something. Madame X is very sensitive."

Questlove said he was having the "greatest day ever" and told Madonna that he "loved" her dancing, though he wouldn't say that she was a better dancer than Fallon.

"Your physical comedy is unparalleled," she told Fallon of his dancing. "A good comedian has to be able to dance. You do need a new hairstylist, but that's another story."

The singer also joked that she and Fallon were going to get married. "I think we decided that we're gonna get married. That’s the whole point of the veil," she said as she pointed out the black veil she was wearing.

Fallon then joked that she was currently married to Maluma, though she said that she planned to end things with the singer. "We agreed to have an open relationship and I think we can do the same," she said.

"I gotta talk to my wife and we'll figure this out," joked Fallon.

Madonna added, "I feel like the more marriages I have, the shorter my veil gets."