Wealthy Pastor Attempts To Explain His Fleet Of Jets 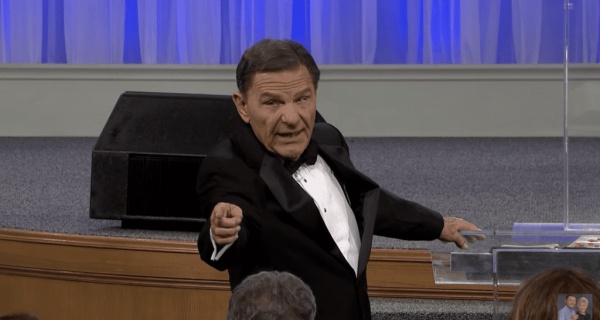 In the waning days of 2015, renowned televangelist Kenneth Copeland laid out exactly why he needs a luxury private jet to do his job: You can’t “talk to God” while flying commercial.

Criticized at the time for his use of extravagant planes, Copeland argued that travel for his work would be difficult, nay, impossible without them. The Texas-based preacher invoked his mentor, prosperity gospel preacher Oral Roberts, who Copeland said faced unsolicited requests for prayer when he flew on public airliners, “agitating his spirit.”

“You can’t manage that today, in this dope-filled world, get in a long tube with a bunch of demons,” Copeland told fellow televangelist Jesse Duplantis, who has faced similar backlash for asking his followers to bankroll a $54 million jet. “And it’s deadly.”

Copeland’s defense, widely mocked and viewed by millions, did little to help his case — many figured the “demons” he spoke of were the same people he’d asked for donations. Last month, the preacher was asked to clarify his remarks by Lisa Guerrero, a reporter for news magazine Inside Edition. Their exchange recently went viral, reigniting conversations about televangelists and the tax-exempt status of churches.

Captured on video confronting Copeland as he got into a car, Guerrero pressed him repeatedly on his 2015 comments, at one point asking: “Do you really believe that humans are demons?”

“No, I do not, and don’t you ever say I did,” Copeland responded, visibly perturbed. He added, “It’s a biblical thing, it’s a spiritual thing, it doesn’t have anything to do with people. People? I love people. Jesus loves people. But people get pushed in alcohol. Do you think that’s a good place for a preacher to be and prepare to preach?”

The questioning centered on Copeland’s Gulfstream V jet, which he announced he had purchased from Tyler Perry in January 2018. Declining to state how much he spent on the aircraft, which is one of three in his possession, Copeland said Perry made the plane “so cheap for me I couldn’t help but buy it.” He again asserted the plane was necessary for his work, which has sent him to nearly every continent and allowed him to spread his message to thousands of people.

“If I flew commercial, I’d have to stop 65 percent of what I’m doing, that’s the main reason,” he said.

Copeland said he was a “very wealthy man” and acknowledged using the private jets to travel to his vacation homes. Guerrero asked how he would respond to those who say preachers shouldn’t live so luxuriously.

“They’re wrong,” he replied “It’s a misunderstanding of the Bible that … if you go into the old covenant, do you think the Jewish people believe you should be broke?”

Guerrero follows up: “Are you saying that Jewish people appreciate money more?”

“They believe in wealth,” Copeland said.

“Some people would find that offensive,” Guerrero responds.

“Wait a minute now, I’m not talking about some people,” Copeland explains, before mentioning the Abrahamic Blessing. “I’m talking about the Bible.”

Some took exception to how Copeland addressed Guerrero throughout the interview; he referred to her as “baby” and appeared to dodge one question by complimenting her eyes. He drew passages from the books of Ephesians and Galatians in his various responses and eventually cited Oral Roberts again, who Copeland says “took the same heat for believing God would prosper you.”

Like many televangelists, Copeland preaches the “prosperity gospel,” which stems from the belief that faith, often in the form of donations to preachers and ministries, will garner riches down the line. HBO’s John Oliver spoke at length on televangelism, or as he put it, “churches who exploit people’s faith for monetary gain,” in a 2015 episode of “Last Week Tonight.”

The host illustrated an unmistakable pattern of these television preachers purchasing — or asking for donations to buy — lavish, high-end jets.

Among the examples were televangelist Creflo Dollar, who was ridiculed in 2015 for asking his followers to raise $65 million for a Gulfstream G650. As The Washington Post’s Abby Ohlheiser wrote at the time, Dollar said he “needs one of the most luxurious private jets today in order to share the Gospel of Jesus Christ.”

During the segment, Oliver also played a clip of Mike Murdock, a televangelist who once bragged to his congregation about paying for two Cessna Citation jets, with cash, no less.

“And since there’s so much jealousy in this room tonight that I can feel over this, a few weeks later I brought myself another one worth three times what that one was.” Murdock said. He paused before appealing to the crowd: “Act happy over my blessing, folks.”

Then there’s Duplantis, who asked his congregation for $54 million to buy a Falcon 7X jet last year. The Post’s Cleve Wootson reported it would have been the fourth plane added to Duplantis’s fleet — all paid for by his loyal congregation. These preachers claim the jets are essential to spread the good word, and Copeland is no different.

Texas-based Kenneth Copeland Ministries could not be reached for comment Monday. A blog post on its website titled “Glory to God! It’s Ours! The Gulfstream V is in our hands!” shows the preacher standing next to his sleek new plane in a bomber jacket. He thanked donors but wrote there was more work to be done: The jet required $2.5 million in upgrades, as well as a new hangar, runway renovations and “special GV maintenance equipment."

“The Copelands, the KCM staff, the leadership team and I are pressing for your harvest and our harvest as a team,” the post reads. “Let’s be aggressive in our faith, in our giving and in our harvesting!”

Speaking with Copeland last month, Guerrero mentioned that both of her grandfathers were poor preachers who were “extremely offended” by those who made money through the practice.

Copeland said he loved Guerrero’s grandfathers, adding that he was “standing on their shoulders.”