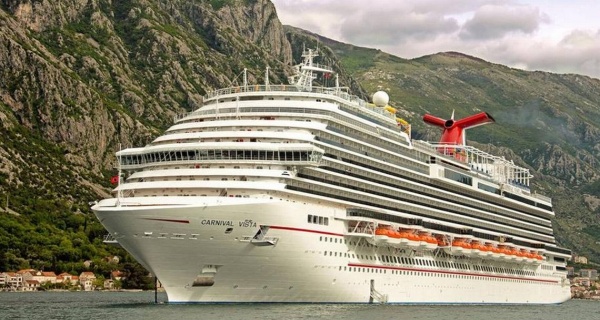 Cruise ships that have failed to meet cleanliness standards in surprise inspections have been revealed.

Its latest report shows that eight ships did not meet the required standards when it came to cleanliness - but 14 vessels gained perfect scores from inspectors.

Ships are scored on a 100-point scale with points deducted for cleanliness violations. A score of 85 or below is a failing score.

On its last inspection, CDC workers found drinking water was not kept at the appropriate halogen levels and there was a lack of filters in the whirlpool spas.

The CDC report also states it found the storage of food in non-food areas and instances of putting clean dishes in areas that were 'heavily soiled'.

Joint second bottom is currently the Silver Wind, operated by Silversea Cruises, and the Safari Endeavour by Un-Cruise Adventures. They both scored 79.

The inspectors on Silver Wind found fruit flies in food and beverage areas, including by a pizza oven, and an instance of food being stored at the wrong temperature.

On Safari Endeavour, the CDC found expired food in refrigerators, dirty surfaces in kitchen areas and utensils in dirty ovens.

Other ships failing to meet the standard are Oceania Insignia by Oceania Cruises, which scored 80, Silver Spirit by Silversea Cruises on 81, Norwegian Cruise Lines' Norwegian Breakaway on 84, Le Boreal from Compagnie Du Ponant SA on 84 and Ocean Dream by Japan Grace on 85.

A spokesperson for Compagnie Du Ponant SA said: 'Ponant takes this issue very seriously and is committed to meeting high standards in every aspect of our operations, across the globe.

'Following the inspection reported here from 2017, Ponant took corrective action within 24 hours. All official documentation requested by the CDC detailing measures taken to resolve the issues were immediately provided by Ponant.' 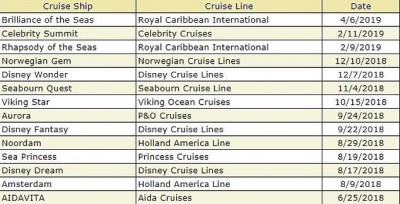 Silversea Cruises said: 'On February 15, 2019, Silversea’s Silver Spirit received an atypical score of 81 during an inspection by the United States Public Health inspectors. The ship has since been re-inspected, on April 2, 2019, and achieved a score of 92 out of 100.

'On March 18, 2018, Silversea’s Silver Wind received an atypical score of 79 during an inspection by the US Dept. of Health CDC in San Juan, Puerto Rico. This score, compared with the score of 93 out of 100 achieved some two months earlier on January 6, 2018, caused the company to initiate an immediate investigation into the result. Following the investigation, it was established that a small number of staff had not followed the robust standards expected of Silversea employees.

'All Silversea ships have comprehensive and rigorous training programs in place to make certain its staff and crew implement best onboard practices.'

Dan Blanchard, UnCruise Adventures CEO, said: 'We immediately took corrective action when the Safari Endeavour received a poor inspection report from the CDC last year. These steps included senior management on site to retrain ship staff, accelerated check-ins and monitoring of procedures on board, and flying two executive chefs to the Vessel Sanitation Program headquarters in Miami for further training. The UnCruise fleet of eight ships is managed by an expert group of directors and managers from our corporate office in Seattle. Internal audit visits are conducted throughout the operating seasons.'

Oceana Cruises said: 'Oceania Cruises' Insignia recently received an unsatisfactory score of 80 during a December 17, 2018, United States Public Health (USPH) inspection in Miami. We are aware of the findings and all deficiencies were corrected well before the official report was recently released. This outcome is not in keeping with the company's commitment to excellence and the highest level of standards for the safety and health of both our guests and crew. Oceania Cruises has an exceptional track record with USPH and we firmly believe that this was an isolated result not indicative of our compliance culture. The Corrective Action Report is on file with the USPH.'