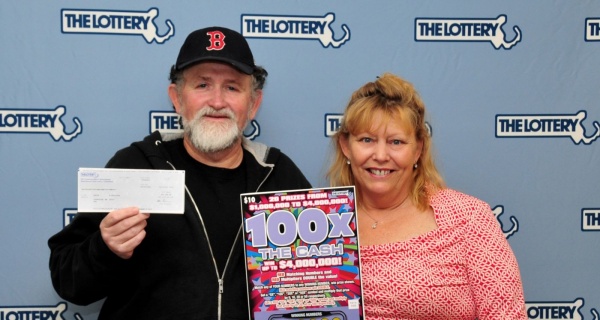 Phillips, now 61, won his two prizes in 2014 and 2016 after buying $10 and $5 scratch-off tickets, respectively, while Pflaumer-Phillips, 59, paid $30 for her winning “Diamond Millions” ticket at an auto repair shop in Middleborough, Mass. (The shop will receive a $10,000 bonus for selling a winning ticket, the state lottery says.)

Pflaumer-Phillips told The Boston Globe that she and Kevin have been buying lottery tickets regularly for the past 20 years. While the couple did not specify how often they buy tickets, if they spend $15 (the average cost of their three winning tickets) each week, that would equal about $15,600 over two decades. Considering that they’ve now won three different million-dollar prizes, their lottery habit certainly seems to have paid off.

After Phillips won his second million-dollar prize, Massachusetts Lottery said in a press release that he chose to receive his winnings in a single one-time payment of $650,000 (before taxes) and planned to use some of that money to fund a trip to Disney World.

Pflaumer-Phillips says she will donate some of the money to animal rescue organizations, plus, “it feels good to help family and friends and to know that he can retire,” Pflaumer-Phillips told the Globe, referring to her husband.

Of course, Pflaumer-Phillips’ eventual tax bill will eat into her lottery winnings, as federal tax law requires 24% withholding from any lottery winnings over $5,000. She’ll also face a state income tax bill of another 5% of her winnings, which would leave her with roughly $710,000 after the minimum of federal and state taxes (she could face additional charges, as well).

Meanwhile, if the married couple’s lucky streak has you feeling optimistic about your own lottery chances, both the Mega Millions and Powerball lotteries are offering large jackpot drawings this week. Mega Millions grand prize is up to $367 million for Tuesday night’s drawing and Powerball’s jackpot has reached $288 million for Wednesday’s drawing.

However, neither of those two jackpots would even crack the list of the five largest US lottery jackpots in history. The biggest US jackpot ever was a nearly $1.6 billion Powerball prize in January 2016, while Powerball gave out more than $768 million to a Wisconsin man in March for this year’s largest lottery prize, so far.

And, don’t forget, that if you do win a big lottery prize, financial experts like Kevin O’Leary advise you to take the lump sum option (and invest that money in relatively safe, long-term stocks), as opposed to taking multi-year annuity payments.