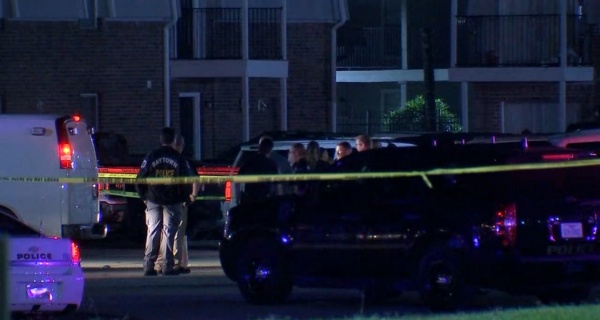 On Monday night, near Baytown, Texas, a police officer shot and killed a black woman just outside the apartment complex where she lived.

Police claim the that the victim, identified as Pamela Turner, a mother of two, was near her apartment complex when the officer, who was patrolling the complex and says he knew she had prior warrants, tried to arrest her.

Baytown Police Department’s lieutenant Steve Dorris claimed that the cop tried to attack the woman with a stun gun, but failed, prompting Turner to attack him with his own stun gun. At this point, Dorris claims that the cop was “forced” to fire multiple rounds of bullets at the 44-year-old woman until she was dead:

You can watch the video below. Warning — the video is graphic:

A Snapchat video of the killing, which was posted to Twitter, shows Turner telling the officer that she’s pregnant — a claim her sister, Antionette, was not able to confirm, although she did tell local NBC affiliate KPRC-TV that Turner is survived by two children in their 20s, as well as three grandchildren.

KPRC reported that neighbors of Turner who had lived around her for five years said she was “not a bad person,” that she tended “just walk around, smoke her cigarettes and walk her dogs.” Antionette told KPRC that the officer who allegedly killed her sister was also her neighbor, and that Turner had previously complained that he was harassing her.

Another neighbor, Taylin Inniss, told NBC News, “They must’ve had a couple of words. Things went a whole different way, and he shot her, and I really feel for the family and I hope they get some type of justice.”

Antionette told KPRC that her sister was taking medication for schizophrenia at the time of her death.

The cop, a veteran, has been placed on administrative leave.