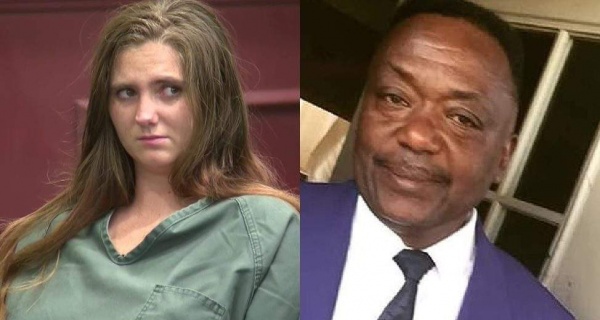 A Georgia woman charged with murder claims she was simply acting as a "good Samaritan" when she reportedly followed and killed a Black senior citizen Tuesday.

The Atlanta Journal-Constitution reports Hannah Payne, 21, told police that she followed Kenneth Herring, 62, after she claims to have witnessed him hit a car and flee the scene. The Fayetteville resident says she called 911, followed the elder man and treaded behind his pick-up truck for about a mile.

WSB-TV 2 reports Payne not only tailed Herring but boxed in his vehicle with her jeep at an intersection in Clayton County.

The police department reports the woman, who has a license to carry, grabbed her gun, got out of her vehicle and confronted the Herring. An altercation ensued that led to the victim being shot. He later died due to complications from his wound.

"All we are at liberty to discuss at this point is during the struggle, the weapon was discharged,” said Major Anthony Thuman. Although the investigation is ongoing, the Atlanta officer expressed that there was enough evidence from the scuffle to suspect the woman committed murder.

The incident is fairly reminiscent of the 2012 high-profile case of Trayvon Martin, who died after being stalked, shot and killed by George Zimmerman. Although Payne's exchange with 911 has not been publicly released at this time, Thuman recanted a similar fact relevant to each case, stating that it is “recommend that people stay in the car and let the officers responding handle the situation.”

The police official also expressed that the minor damage Herring reportedly caused to the hit-and-run vehicle was not significant. Payne's attorney, Matt Tucker, claims the victim also hit the defendant's car and alleges his client was acting out of self-defense.

“It just seems like an unfortunate situation of a good Samaritan trying to stop a person on a hit-and-run,” said Tucker.

Payne claims that Herring became belligerent and violent when she asked him to return to the scene of the crime.

“She had a ripped shirt, she had scratch marks on her. It should be [finger] prints of his and hers on the gun," her attorney continued. “She felt that she needed to pull that gun to defend herself and it went off."

Witnesses, such as Nicole Jackson, alluded to Payne as the aggressor. The onlooker reported to the police immediately after the physical altercation that she watched as the woman approached Herring with a gun and ordered him to exit his truck.

“All of a sudden you hear a ‘pow’ and she got on her phone immediately and was like, ‘He pulled the trigger,’” Jackson added.

“She had a bad girl vest on but after she shot him, she ran in the car, changed clothes; she put a pink little sweater on,” she detailed.

Christine Herring, the victim's wife, questioned Payne's story and expressed that she wants to see her do time in jail for the crime.

“Why would you get out?" she said, referring to her stepping out of the car with a gun to confront her murdered husband. "That means you weren’t in no danger if you got out of your car to go to his car."

Payne is charged with murder without malice. She is being held without bond in Clayton County Jail and is expected to return to court on May 28 for a preliminary hearing.