30 Tons Of Trash Have Been Left On Mt. Everest 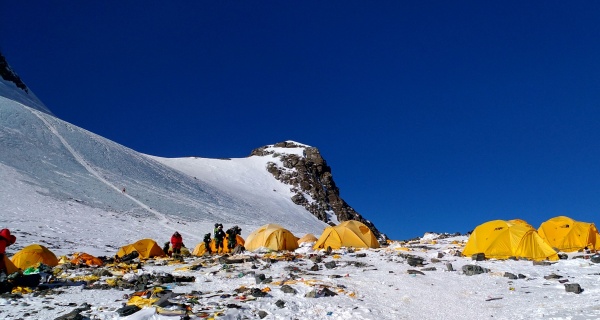 Date Posted: Friday, May 3rd, 2019
Mount Everest has a trash problem.
A clean-up team in Nepal recently picked up more than three tons of garbage from the area around the world's highest peak, and they plan to grab a total of 11 tons in a 45-day cleaning initiative that started April 14, local media reported.
"Our goal is to extract as much waste as possible from Everest so as to restore glory to the mountain. Everest is not just the crown of the world, but our pride," Dandu Raj Ghimire, Nepal's tourism director, told reporters earlier this week in Kathmandu, according to the Hindu.
The country's tourism department is teaming up with local government as well as mountaineering groups in a first of its kind effort to clean the mountain, according to the Himalayan Times.
Around 500 foreign climbers and 1,000 climbing support staff will make it to Everest's higher camps this year, according to the tourism department. As they climb, mountaineers need large packs and often leave behind trash, both degradable and not.
Ghimire said the team would also bring down bodies of climbers who died trying to scale the peak. According to the Himalayan Times, four bodies were already found at the base camp.
Last month, officials said that more bodies were being revealed on Everest as the mountain's glaciers melt amid a warming climate.

Past efforts have been made to remove the trash, including a 2014 rule requiring all climbers to bring back at least eight kilograms, or roughly 17 pounds – the estimated amount the average climber leaves on Everest, according to the Kathmandu Post.
"If only climbers brought back their own waste, it would greatly help keep Everest clean," Ghimire said, according to the newspaper. "It's not about the 8kg waste, but bringing back the waste they produce."
According to the Everest Summiteers Association, a total of 30 tons of trash is still atop the mountain, ABC reported.
The 12-member cleaning team reached the base camp earlier this week and would ascend as high as they could to remove the waste, the Kathmandu Post reported.
"Everything on Everest, other than rock and snow, will be brought back," said Tika Ram Gurung, secretary of the Nepal Mountaineering Association, according to the Post. "The goal is to send the message that we should keep this mountain pollution free."