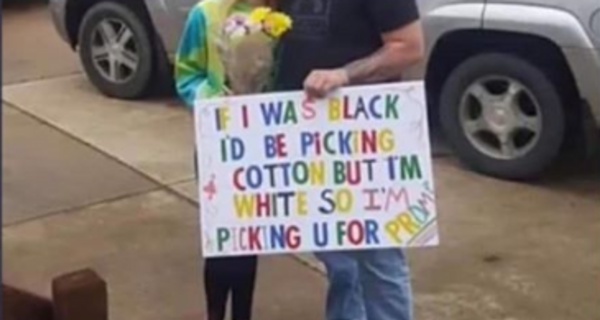 Date Posted: Friday, May 3rd, 2019
A prom proposal by an Ohio student has prompted widespread condemnation and backlash after a photo of him holding a poster with a racist statement was circulated on Facebook.
In the photo, the student stands beside a girl and holds a poster that reads, "If I was black I'd be picking cotton, but I'm white so I'm picking U for prom!"
The student, who was not identified, has been "spoken to," according to a statement from Clear Fork Valley Local Schools Superintendent Janice Wyckoff.
The school district, roughly 15 miles south of Mansfield, serves students primarily in the Bellville and Butler communities.
Wyckoff said the type of speech displayed on the poster board is inappropriate, regardless of the occasion, and the student, who lives in the district but goes to another school, will not be attending Clear Fork High School's prom.
"I want to make it clear that our school district is disappointed in this situation," the statement read in part.
"Our student body should not be defined by a single act of a student, who did not think his action through. This is a teachable moment for this student in particular and for all students."
Wyckoff said the original post has been removed, and the student is remorseful for his actions.
It's not clear if he faces disciplinary action.
"The student now understands there are consequences for words," the superintendent's statement said. "I want everyone to remember this is a child and adolescent who made a bad decision and is learning a lesson the hard way."
A similar incident happened in Florida during prom season last year.
Multiple outlets reported that a Florida high school student posted a photo of a sign that read, "If I were black I’d be picking cotton, but I’m white so I’m picking you 4 prom?"
Wyckoff said she can't speak as to what the student was thinking, or if he was aware of the prom poster reported in last year's news coverage.