Officer Pulls Guns On Innocent Man Working In His Yard 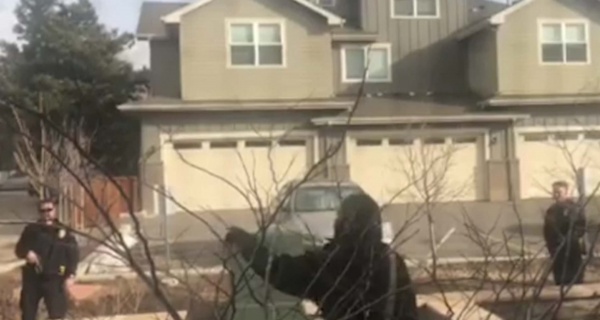 Date Posted: Thursday, March 7th, 2019
Colorado police chief was on the defensive when protesters and local lawmakers demanded to know why his police officers drew their weapons on an innocent African-American man who was collecting trash in his back yard.
Besieged Police Chief Greg Testa looked into the audience and saw folks clacking trash grabbers at a Boulder City Council meeting on Tuesday, the  Denver Post reported. An internal affairs investigation is ongoing while the initial responding officer is on administrative leave.
At the council meeting, Testa admitted that the Black man did nothing wrong yet his officers pulled their guns on him.
Councilwoman Lisa Morzel asked him to explain the policy that allowed his officers to draw their weapons in that situation, the Daily Camera reported.
Testa said it’s authorized when cops perceive a threat. “This is an extremely concerning issue, and one that we are taking very seriously,” Testa rambled.
On March 1, a Boulder officer confronted the man, a Naropa University student, and asked him if he was permitted to be there. The man told the officer that he lived and worked in the building, showing the officer his school ID card. Nevertheless, the cop decided to detain him and call for assistance, claiming that the man was uncooperative and refused to put down the grabber he was using to pick up trash.
The man was fortunate to survive the encounter. The troubling trend of police killing unarmed Black people have shown no signs of letting up, from Tamir Rice to Botham Shem Jean to Emantic “EJ” Bradford Jr., there appears to be a new nearly shooting every week.
This also comes against the backdrop of the wave of white people calling the police on innocent Black people doing routine things. Last October, the New York Times listed 39 incidents that captured national attention since May 2018. They include a 12-year-old Black boy mowing a lawn in Cleveland, a uniformed Black firefighter doing his job in Oakland and a former Barack Obama aide moving into his new apartment in New York.
Charles Lief, president of Naropa University, said the unidentified man does not want to come forward to become a symbol of racial profiling in the city.
“I do not want to underestimate the amount of trauma that was experienced by our student, who was the victim in this situation,” Lief said at the meeting. “Students, staff and faculty of color at Naropa, and other institutions have all experienced various degrees of racism living in this community.”
Watch the video below: