Which Dating Site Is Right For You? 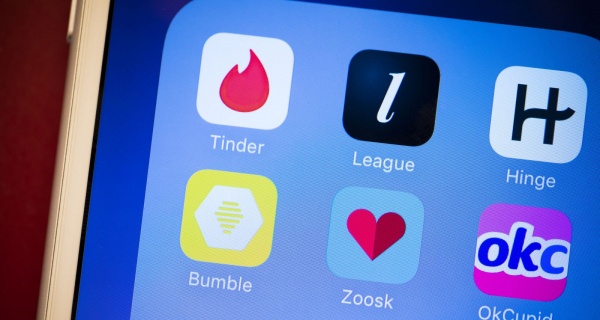 We're halfway through winter, with its cold and dreary weather. If you're single, you may be searching for warmth, human connection and a partner who's down to spend a lazy weekend rewatching Game of Thrones. And what better place is there to find deep, meaningful companionship than on the internet?

Here's an overview of the best dating apps on the market. My recommendations are based primarily on my own dating-app experiences as a woman, with some word-of-mouth impressions from friends thrown in for good measure.

Bumble is basically Tinder for women... and on a timer. Bumble requires women to message first and if the guy doesn't message back within 24 hours, he loses the potential match. Because that's the one thing my love life was really missing... arbitrary time limits.
The timer is designed to encourage contact, and some people really do appreciate that feature. But if you're someone who procrastinates, Bumble may not be for you. Also because women must message first, Bumble tends to weed out the slightly more insecure males. However, the rate of overly confident males tends to be higher than I've seen on other apps. Bumble also has a BFF feature, but that's really not the focus of a dating app gallery, so I'll save it for another time.

Whether you're looking for a hookup or an LTR (long-term relationship), Tinder has you covered. It's basically the first stop for those entering the dating world. If you want to play the odds when it comes to online dating, you need to be swiping where everyone's swiping.
On the upside, the profiles are brief, which allows you to make decisions quickly. The downside is that short profiles make it harder to figure out what people are looking for. Knowing very little about a person can also make initial messaging more challenging. You'll need to wade through a sea of profiles, which makes it easy to pass over people you might have given a chance under different circumstances.

OkCupid, how you confuse me. I have friends who've met spouses through OkCupid. My last serious relationship came from OkCupid. In fact, I've been on OkCupid, on and off, for roughly the last 11 years. Profiles are much more in-depth than most dating sites, and if you answer a seemingly endless series of questions, they will spit out a reasonable Match/Enemy percentage ratio on profiles to help you gauge compatibility.
Changes in the last year have made OkCupid a bit more like Tinder, focusing more on swiping and eliminating the ability to message a user without matching with them first. You can still send a message -- it just won't show up in the recipient's inbox unless you match. Because who doesn't enjoy sending a thoughtful message to someone who might never see it? However, OkCupid has pointed out that these changes did help lower the number of offensive messages users received, which might be a worthwhile trade-off.

Hinge focuses on common connections that you and a potential partner share on Facebook. Which is great if you trust the judgment of your friends and family. Of course, some of us are trying to meet new people, far removed from our everyday lives. (Hinge may have come to understand that since you no longer need Facebook to sign up.) The app also asks questions to help you match with better connections, which can be a plus for serious relationship seekers.

Coffee Meets Bagel hopes to offer users better-quality matches by sending curated matches, or "bagels," each day at noon. They suggest ice-breakers for first messages, and the profiles are more in-depth than Tinder. For people who like a little extra hand-holding, CMB isn't the worst option. However, I found the app confusing to use, with too many features and too many gimmicks. I shouldn't have to look up online tutorials to figure out how to use a dating app. And why call matches Bagels?

I was also disappointed in the notifications, which I found too pushy. CMB was constantly "gently" reminding me to message users I'd matched with. I eventually disabled the app after receiving the following notification: "Show [match name] who's boss and break the ice today!" Should a potential future relationship be rooted in a hierarchical power dynamic? At the end of the day, I have friends who've had good matches on CMB, but it isn't my favorite app.

Happn matches you with people who are located nearby. It's a cool concept and helpful for people who want to meet someone in a more organic manner. That said, I've never met a single person who actually uses the app.

After signing up, Happn showed me, 68 users, it said I had crossed paths within the preceding three hours, though I hadn't left my apartment all day. This might be helpful if you're looking to date your immediate neighbors (or Uber drivers), but I don't see the attraction when competitors like Tinder already show the distance between you and other users. Frankly, if I saw a cute guy in a coffee shop, I'd just approach him rather than check to see if he's on Happn. The app seems designed for people who don't want to use online dating but who also don't want to approach people in real life. Pick a lane.

The League is an "elite dating app" that requires you to apply -- and supply your job title, college and LinkedIn profile. Big cities tend to have long waiting lists, so you might find yourself twiddling your thumbs as your application is reviewed. (Of course, you can pay to expedite the process.) The exclusivity can be a draw for some and a turnoff for others, but I'll let you in on a secret: I've seen most of the profiles I come across on The League on other dating apps, too. So at the end of the day, you'll probably see the same faces on Tinder, if you aren't deemed elite enough for The League.

Most dating apps are fairly LGBTQ inclusive. Still, it's nice to have an app to call your own. Her is tailored to lesbian, bisexual and queer women. It's a worthy notion -- but the app has some bugs and glitches that made it frustrating to use. Most of my queer female friends have told me they found the app "just OK," and that they usually end up back on Tinder or Bumble. Still, I checked it regularly for some time and had a few pleasant conversations with actual human beings. And isn't that all we're really looking for in a dating app?

Clover tried to be the on-demand version of online dating, letting you order a date much like you would a pizza. It also provides numeric match predictions based on compatibility, though it isn't entirely clear how those numbers are calculated.

I was on Clover for quite some time but had since forgotten it existed until I started to compile this list. It strikes me as a less-successful hybrid of OkCupid and Tinder with a relatively small user base, even though I live in an urban area with plenty of people who use a wide variety of dating apps. Clover says it has nearly 6 million users, 85 percent of whom are between the ages of 18 and 30.

Plenty of Fish launched in 2003 -- and it shows. The problem I come across over and over again is that POF is filled with bots and scams, even though it may have the most users of any dating app. POF's issues don't mean you won't be able to find love on it, but the odds might be stacked against you. Unless you're into dating bots.

Match.com has a free version, but the general consensus is that you'll need a paid subscription to have any luck. That's a hangover from the early days of online dating when paying for membership to a site meant you were serious about settling down. But my friends and I have long since come to the conclusion that you might be a little too eager to find a significant other if you're paying to get dates, particularly given the abundance of free dating apps. There are definitely paid features on some dating apps that are worth the price, but I've yet to be able to justify shelling out cash for love.

eHarmony was one of the pioneers in the online dating space, and -- while I haven't personally used this one -- we all remember the pitch, thanks to years of TV commercials: The service matches couples based on "29 dimensions" of compatibility (as determined by a thorough relationship questionnaire). While you can review the profiles of your prospective matches for free, you'll need to pay to unlock the full features of the service. But that comes with a guarantee: If, after three months of paid membership and communicating with at least five members, you're not satisfied, eHarmony will refund your money. Despite a rocky road that eventually involved a high-profile lawsuit, the site finally added same-sex dating in 2013, too. I have mixed feelings about using the site myself, but the site is at least technically more inclusive now.

Have you had a good (or bad) experience with one these services? Do you have another one you'd recommend? Share your experiences in the comments.