Watch: B. Smith's Husband Continues To Defend Relationship With Mistress 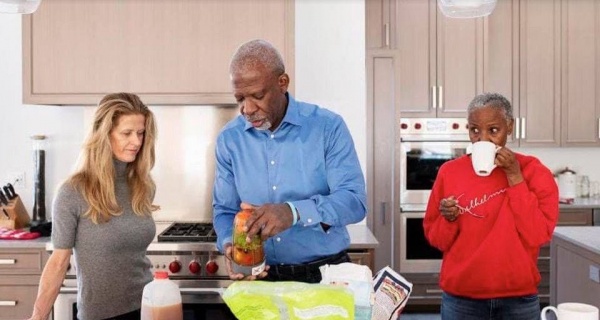 Date Posted: Friday, February 15th, 2019
The husband of former lifestyle guru B. Smith appeared on TV with his new girlfriend on Friday morning to once again insist that his wife gave him her blessing to date someone else.
Barbara Smith, 69, who is better known as B. Smith, was diagnosed with Alzheimer's in 2013 after suffering with symptoms for four years.
As her conditioned worsened her husband Dan Gasby, 64, began dating a new woman Alex Lerner while continuing to care for his sick wife.
Now, Gasby and his girlfriend appeared on ITV daytime show This Morning where they attempted to justify their controversial relationship following a bout of criticism.
Speaking to Eamonn Holmes and Ruth Langsford on a live video link from New York Dan said: 'Everyone has weighed in from a moral, religious, every kind of standard you can imagine.
Watch below:
'My wife said to me, after she got the diagnosis in 2013... she put her hand on my arm she said, "I don't want anyone to tell our story. I want you to tell our story and I want you to tell it truthfully"
'We've always been in the public eye she said "I want you to go on, I don't want you to sit in a room with me and not have a life."'
He continued: 'To me it's the truest expression of love to not hold someone to something that is not reasonable for their life expectancy.
'But at the same time I made a commitment and I made a vow to take care of her.'
Speaking of his wife's condition Dan described her as a '69-year-old' toddler who has become increasingly difficult to care for.
He said: 'You lose the ability to understand everything you don't know what day what week what month, what year it is, you don't know even how to toilet yourself.
'I call it living in hell without the heat.'
Dan went on to describe how he had initially turned to drink while trying to cope with his wife's diagnosis.
He went on: 'It's very frustrating and it caused me quite honestly to drink too much at a point to gain 30lbs to feel like I was in hell.
'I love her and I wanted to take care of her, which I'm doing, but...you start to live symbiotically their lives, and their lives start to close and shut down.'
Alex, who began dating Dan in 2017 and now helps care for B, says that B doesn't have the 'capability' to understand who she is.
She visits Dan's home where he lives with B every other weekend and even has her own space there.
Describing the abuse she had been subjected to personally she said:  'There is a lot of pressure.
'It has been very hard, there have been very hard judgments on me that are completely unexpected and unwarranted. It's been very rough.'
Dan goes on to describe the isolation he felt before he met Alex.
He tells Ruth: 'Loneliness is deadly. Loneliness creates depression, Loneliness creates the feeling of hopelessness that causes you to spiral into things that ultimately take you down that will kill you.'
B. Smith's diagnosis came to light in 2014 when she was found in Manhattan after she went missing in Long Island.
The trailblazing model began her fashion career by becoming the first African-American woman to grace the cover of Mademoiselle magazine in 1976.
A decade later, Smith, a native of Pennsylvania, opened the first of her three restaurants located in New York, Washington, DC, and the village of Sag Harbor on Long Island.
In 2001, the renowned New York restaurateur launched her first home decor collection for Bed Bath and Beyond, offering bedding, bath ensembles, rugs, and paper products.
For several years Smith was the spokesperson for national retailers. She also authored three cookbooks.
In 2011, she appeared in the Off-Broadway play Love, Loss and What I Wore, co-written by Nora Ephron.
Her half-hour talk show B. Smith With Style aired on BET and Bounce TV networks. She also hosted a show on SiriusXM radio.
Smith married Dan Gasby in 1992. He was the executive producer of the Essence Awards and the senior vice president of marketing at Camelot Entertainment Sales Inc.