How Often Is That Airline Blanket Washed? 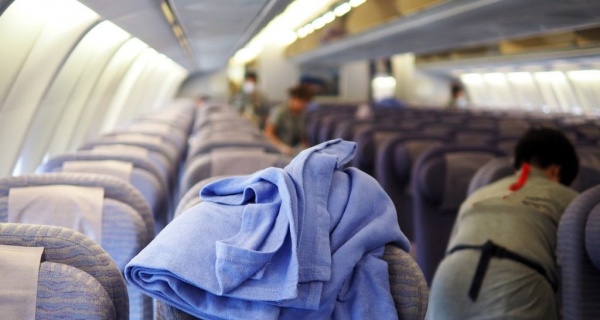 Date Posted: Monday, February 4th, 2019
There are plenty of things you’re supposed to avoid while flying. In case you didn’t know, you should never turn off your air vent, order the tea, or go barefoot in an aircraft. But, what you may not know is that you might also want to avoid those cozy airline-provided blankets.
According to one Reddit user by the name of mehow44, some airlines don’t bother to clean or swap out those blankets between flights. That means you could be covering yourself up in someone else’s germs.
"I worked for Southwest as a flight attendant. Those blankets and pillows? Yeah, those just get refolded and stuffed back in the bins between flights,” the user wrote. “Only fresh ones I ever saw were on an originating first flight in the morning in a provisioning city. Also, if you have ever spread your peanuts on your tray and eaten, or really just touched your tray at all, you have more than likely ingested baby poo. I saw more dirty diapers laid out on those trays than food. And those trays, yeah, never saw them cleaned or sanitized once."
We’ll let that sink in for a minute…
According to active flight attendant and HuffPost blogger Sara Keagle, this dirty little secret is indeed true, at least partially. As she revealed to HuffPost, freshly washed blankets are only supplied to the first flights of the day. On subsequent flights, the blankets are re-folded and re-used. As for the tray tables, Keagle said they are cleaned “about once a day, usually when the aircraft RONs (remains overnight).”
Don’t be fooled by any plastic packaging over those blankets either. In the year 2000, the Union of Needletrades, Industrial, and Textile Employees accused some of its clients of repackaging their blankets without ever cleaning them, Bravo reported. A few years later, The Wall Street Journal released a report explaining that most airlines only clean their blankets every five to 30 days.
And, in 2017, comedian Nicole Byer shared the horrifying tale of her flight on Delta when she found a piece of human feces inside her first class blanket.
Moral of the story, if you really want to stay warm on your next flight it may be best to bring your own blanket. Here are three easy to pack blankets to ensure you’re only covering yourself in your own germs.