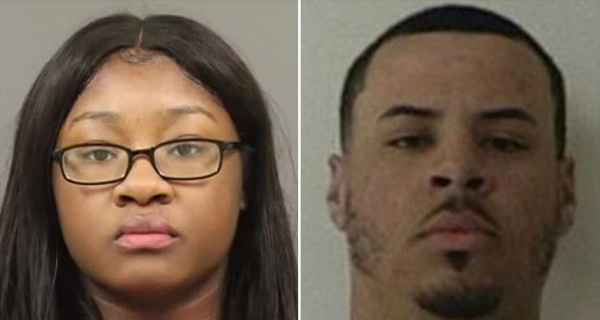 Date Posted: Friday, January 25th, 2019
The wife of a soldier has been charged in the death of her husband who was home on leave. The bond is set at $2.5 million.
Kemia Hassell has been charged with murder for the death of her husband Tyrone Hassell III. She is facing life without parole.
She lives in Georgia and has never been a resident in Michigan.
The press release from Prosecuting Attorney Michael Sepic describes a love triangle gone bad.
Tyrone was allegedly shot an killed by Jeremy Cuellar, who was having an affair with Tyrone's wife, Kemia, according to court documents.
According to the Berrien County prosecutor, all three of the individual's involved were active duty U.S. Army soldiers at Fort Stewart in Allenhurst, Georgia.
Tyrone had been at a family gathering and was bringing food back to Kemia and their 1-year-old child. Tyrone dropped the food off and then went back to his car when he confronted by an assailant who shot and killed him. According to court documents, Cuellar and Kemia were having an affair and plotted to kill Tyrone.
Court documents say Cuellar traveled from Fort Stewart to Chicago several days prior, waited for directions from Kemia to ambush Tyrone, and did so. The motive for the two may have been to continue their relationship and reap the Army’s death benefit from his murder, per the prosecutor.
Cuellar is in custody in Georgia and is awaiting extradition proceedings. Both are facing charges of First Degree Premeditated Murder. Cuellar is also being charged with a felony firearm.
Tyrone Hassel Jr. is still in shock that his daughter-in-law is charged with killing his son, Tyrone Hassel the third.
“You got to understand man, this is a person that slept in my home,” he said. “I spent two weeks with this person, after she killed my son.”
Hassel Jr. says Kemia appeared to be a different person around his family.
“I grieved for her more than I grieved for myself. Because I saw a woman that lost her husband. I look at my grandson and I saw a kid that lost his father,” he said.
Tyrone’s family says they feel deceived by Kemia.
“Just wondering what type of person she really is. Because she deceived us all. I thought she was a completely different person than who she really is.”
Tyrone’s father has one last message for his son.
“I would tell him I love him. And I’m quite sure he knew that. But I don’t know how many times I told him I was proud of him. And that’s one thing I would tell him, how proud I was of him,” said Hassel Jr.