'Burnout' Is Taking A Toll On Doctors 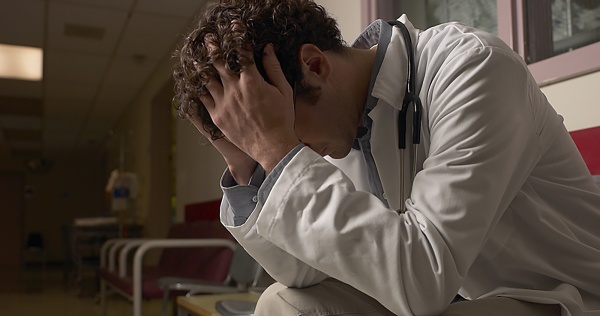 Doctor burnout is becoming a huge problem, according to new research, which finds that nearly half of all physicians feel completely depleted, to the point where one in seven have contemplated suicide.

The annual Medscape report, released Wednesday, finds that on average, 44 percent of the medical professionals your existence depends on report feeling stressed out to the point where they’ve considered leaving the field altogether.

A higher percentage of these wiped-out life-savers are women, according to the survey of more than 15,000 doctors.

“It’s alarming,” says Brunilda Nazario, lead medical director at WebMD, which owns Medscape. “These numbers haven’t changed, and the problem just continues to be a trend, despite increasing programs to address wellness,” such as “nutrition and exercise programs, or more time off.”

The reason for the scary numbers isn’t what you would think: Most doctors say it’s the level of paperwork and data input they’ve had to do since medical records went digital. Doctors end up spending about 45 minutes per patient visit on tasks like “inputting data codes for the visit,” Nazario says, leaving little face-to-face time with patients.

“[Doctors] are spending an enormous amount of time taking in data during physician-patient visits,” she says. “I know during my last visit for my physician, I think the doctor spent no more than two minutes looking at me. They were looking at a computer screen.”

The result is scary: “I dread coming to work,” one neurologist says in the report.

A family physician says the stress is taking a toll on her physically: “I’m having recurrent miscarriages.”

Nazario says that while burnout is common among workers, for doctors, it can seem worse because all the schooling and training they’ve undergone can feel like a waste when most of their day is spent typing codes into their medical software.

“It’s almost like being a cog in a wheel, where they’re going through the motions of what’s necessary, not necessarily using all the knowledge that she or he has gained in the years of training,” Nazario says.

And though it changes every year, in 2018, urologists reported the highest rate of burnout and depression (54 percent), followed closely by neurologists (53 percent).

Nazario says she’s not sure why urologists are this year’s most burnt out, but that doctors who work longer hours tend to have higher levels of burnout, according to the survey.

“I don’t think physicians blame the patients,” she says. “It’s pretty clear that they feel this is a system-wide health care situation.”

On the other hand, the doctors who were happiest on the job?