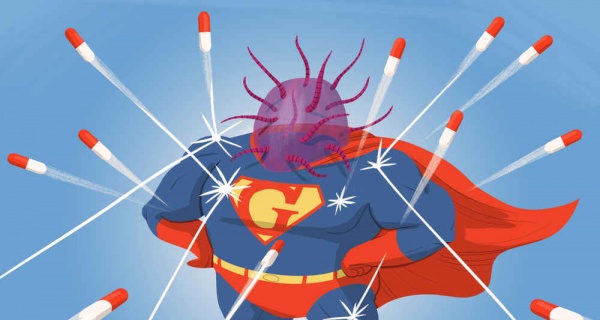 Date Posted: Monday, January 7th, 2019
Super-gonorrhoea is becoming more resistant to antibiotics, leaving health officials with limited options to treat the disease.
The sexually transmitted infection (STI) is becoming increasingly difficult to treat and is now able to fight off three common drugs.
It comes amid a huge rise in cases - there were almost 45,000 diagnoses in England in 2017, a rise of 22 percent in just one year, figures show.
Super-gonorrhoea is one of many antibiotic-resistant infections which together kill an estimated 700,000 people worldwide each year.
Patients are normally given ceftriaxone and azithromycin to combat gonorrhea, the third most common STI in Britain.
But a report from Public Health England revealed the resistance to these three drugs continues to grow, limiting the options available to treat the disease.
Ciprofloxacin is now proving resistant in 36.4 percent of cases of gonorrhea, 2017 figures in the Public Health England report shows.
This is a rise from 33.7 percent in 2016.
Azithromycin was resistant in 9.2 percent of cases in 2017, compared with 4.7 percent in 2016.
In March last year, the 'worst case ever' of super-gonorrhea was detected in a British man after he had sex with a south-eastern Asian woman.
Laboratory tests revealed the Brit had high resistance to both ceftriaxone and azithromycin. He was eventually treated with ertapenem.
The case leads to warnings from doctors that more difficult cases such as this would be seen.
World Health Organization experts raised fears two years ago the STI, once known as the 'clap', could become immune to antibiotics in a 'matter of years'.
Analysis of STI data around the world previously revealed 97 percent of countries have reported strains of gonorrhea that are resistant to ciprofloxacin.
And more than 50 countries warned strains were showing some form of resistance to ceftriaxone.
Chief Medical Officer Dame Sally Davies wrote to GPs in 2015 warning that gonorrhea could become an ‘untreatable disease’.
Since then, health officials have urged people to remember to use condoms.
But in recent years, it has been revealed that throats act as a 'silent reservoir' for gonorrhea.
Drug-resistant gonorrhea can spread from an infected person's throat during oral sex without them even knowing they have the STI, experts said.
About one in ten infected men and five in ten infected women will not experience any obvious symptoms, according to the NHS.
The number of gonorrhea cases has risen alongside other sexually transmitted infections such as syphilis and chlamydia.
Chief Medical Officer on the rise of antibiotic resistance