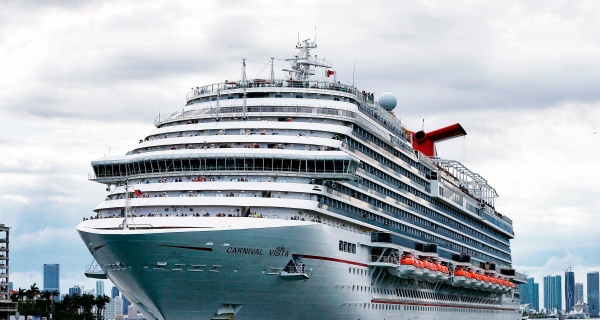 Date Posted: Friday, January 4th, 2019
Doctors are trying to solve the mystery of a Missouri teenage girl who went on a cruise with her family and ended up with a still-undiagnosed illness that caused her to go blind.
Last summer, Jordyn Walker developed stomach pain and bloody stools after she came back from a cruise, local CBS affiliate WDAF reports. “It just went haywire from there. Everything started swelling,” Jordyn said.
Doctors ran a series of tests and eventually sent her home with a diagnosis of a sinus infection. But Walker, 15, ended up losing her sense of taste and smell, and began seeing several specialists who ran more tests. “Everything came back normal,” said Jordyn’s mom, Kendyll Walker.
Jordyn began to get better and her family was told that it was a “one in a million” incident that probably would never happen again. But two weeks before Christmas, her illness came back — and it was worse than before. “My whole face just turned purple and bruised and giant with blood,” she said.
“It was terrifying to watch it happen all over again and knowing that we couldn’t do anything about it,” Kendyll Walker told WDAF. Jordyn went to the emergency room at the University of Kansas Hospital, and ended up in pediatric intensive care. She was hospitalized for 16 days and underwent more tests, took medications and had two surgeries to reduce swelling in her eyes, but doctors still don’t know what happened.
“There’s no answers. There’s nothing they could do,” Kendyll said. Jordyn now is permanently blind from her illness. “She won’t get a chance to drive,” Kendyll said. “Or see her sisters get married like she wants so much.” Still, Jordyn says she’s determined to be positive about the experience. “I’m not going to let this stop me,” she said.
There’s no obvious answer for what could have caused Jordyn’s illness, infectious disease expert Amesh A. Adalja, MD, senior scholar at the Johns Hopkins Center for Health Security, tells Yahoo Lifestyle. “It’s also possible that it’s not caused by one single disease,” he says. However, he adds, there are “systemic infectious diseases that can spread to the eye” like a bacterial or fungal infection that can cause endophthalmitis, an inflammation of the inside of the eye. “It’s possible that she had a bacterial infection that caused the initial GI symptoms and that spread systemically to her eye,” Adalja says. “But it also could have been an autoimmune process or something entirely different.”
Vatinee Bunya, MD, co-director of the Penn Dry Eye and Ocular Surface Center, agrees. “Infections can affect any part of the eye and cause a variety of problems such as corneal ulcers, severe inflammation inside the eye, or damage to the retina or optic nerve,” Bunya tells Yahoo Lifestyle. “Severe infections or inflammation inside the eye can also lead to increased eye pressure or glaucoma. If any of these are severe enough or are difficult to control or treat, they can lead to blindness or loss of the eye.”
Not only that, Bunya says that bleeding behind the eyes can cause increased eye pressure that can lead to blindness. “Someone can go blind from this within hours if the pressure is not released and the eye pressure is not decreased in time,” she says. However, she adds, this is usually caused by a trauma, like being punched in the eye or in a car accident, and “rarely is seen spontaneously.”
Symptoms of eye swelling depend on the cause of the eye swelling, Bunya says. “Possible symptoms may include redness, swelling over the white part of the eye, swelling of the eyelids or tissues surrounding the eye, pain, or decreased vision,” she says.
While Jordyn’s story is terrifying, Adalja says the average person shouldn’t be worried about experiencing this. “The fact that this defies explanation shows how rare it is and how low of a threat it is to the general public,” he says. “Norovirus and influenza are the biggest things you need to worry about on cruises, not mysterious illnesses that make people go blind and lose their taste.”