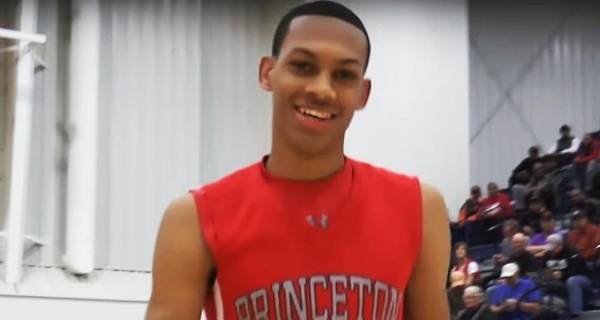 Darius Bazley may be the nation’s most expensive intern.

While the 2018 McDonald’s All-American trains independently for the 2019 NBA draft, he will earn $1 million as part of an endorsement deal with New Balance that includes a three-month internship at the Boston-based apparel company this winter, according to The New York Times’ Marc Stein. The seven-figure paycheck is guaranteed “no matter what happens” in Bazley’s career, but the 18-year-old can reportedly make as much as $14 million if he meets his performance marks on a basketball court.

Wait, who is Darius Bazley?

By now, the public at large knows Bazley more by his off-court exploits than his considerable talents. He famously de-committed from Syracuse to enter the G League out of high school, before hiring agent Rich Paul and removing his name from consideration for the NBA’s developmental program, too.

Best known as LeBron James’ friend and agent, Paul negotiated Bazley’s New Balance deal, which will coincide with the final three months of the college basketball season from January through March. In the meantime, Bazley is training and living in Tennessee with James’ former Miami Heat and Cleveland Cavaliers teammate Mike Miller, now an assistant coach on the University of Memphis staff, per Stein.

Is Bazley good enough to warrant a lucrative shoe deal?

Despite Bazley’s status as a five-star recruit ranked among the 15 best players in his high school class, there are some questions as to how NBA-ready he will be after a year spent away from competitive basketball. (He last played in front of scouts at the Nike Hoop Summit in April.) Even Paul conceded that he nixed Bazley’s G League plan out of concern that the kid isn’t quite ready to be unveiled.

“Right away I knew that the G League was not going to be good for Darius,” he told Stein. “It’s great for some people, but there was no upside for him.”

What Paul probably means: There is an upside to the G League — namely, a year’s worth of seasoning against elite competition in an NBA-style system, which, if all went according to plan, could result in a higher draft slot for Bazley — but the downside is potentially devastating. Underperformance from the slender 6-foot-9 prospect might send his draft stock spiraling, to say nothing about the risk of injury.

The NBA revealed plans last week to increase “professional path” salaries for prep-to-pro recruits from $30,000 to $125,000 in an attempt to incentivize players seeking an alternative path to the NCAA to choose the G League rather than a year abroad, as former McDonald’s All-American Brandon Jennings did by spending a year in Italy before being drafted 10th overall in the 2009 NBA draft.

Jennings signed with Under Armour out of high school and before entering the NBA, but Bazley is taking this a step further, essentially forging a new path by finding a shoe sponsor for a gap year of independent study. Jennings earned NBA Rookie of the Year consideration and bounced around six different teams before landing in China prior to his 30th birthday. Bazley isn’t considered quite the prospect Jennings was, and it remains to be seen if he can buck the trend of players who sought alternative routes never quite reaching their potential (see: Emmanuel Mudiay, Jeremy Tyler, etc.).

Paul is seeking the best of all worlds — making money for Bazley and maintaining his draft status while cutting short the number of opportunities scouts will have to see him against top competition.

This is precisely the conundrum that is stalling the NBA’s negotiations with its players’ association over the abolishment of the one-and-done rule. NBA teams are, at the very least, seeking mandatory combine workouts and physical examinations for any high school prospect wishing to enter the draft. Naturally, agents are resistant to either demand. The shroud of mystery around certain players makes them more valuable than they might be if the NBA can better determine their actual value.

What’s in this for New Balance?

New Balance has been seeking a face to front their efforts toward taking a piece of the basketball sneaker pie, most notably pitching Gordon Hayward, whose Boston Celtics just opened a New Balance-sponsored practice facility next to the company’s headquarters. Hayward passed on the offer to sign with Anta this summer, leaving New Balance still floundering for a marquee sponsor.

There, Paul found a match for Bazley, whose shaky draft status has some wondering if New Balance is throwing the Klutch Sports founder a bone in hopes of landing one of his higher-profile clients soon.

Either way, New Balance may have already made its $1 million investment back based on The New York Times profile and the attention that is sure to be paid to Bazley over the next year, regardless of his effectiveness as an intern. As for whether the year off that this contract affords Bazley is a wise long-term investment for him as a basketball player, we’re as curious as the NBA scouts, even if $1 million is (presumably) a lot more than he would have made playing for Syracuse or in the G League.