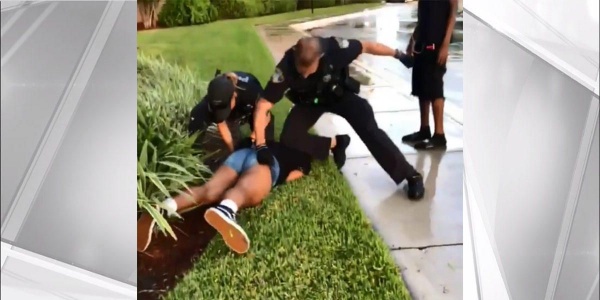 This is the horrific moment a Florida cop repeatedly punches a teenage girl sprawled on the ground as he tries to arrest her.

The shocking video was posted on Instagram and shows a 14-year-old black girl being punched by a Coral Springs officer in Fort Lauderdale on Thursday afternoon.

The cops allegedly told the girl and her friends to leave Coral Square Mall where they were hanging out after receiving a call about 30 unruly teenagers.

She reportedly 'back talked him' leading to the physical confrontation and arrest.

A friend recorded the terrifying moment two Coral Springs officers bring the girl to the ground and one pummels her with punches.

The nine-second clip starts with the victim lying on the grass with her face to the ground as the two officers held her down. A male Coral Springs cop pins her down with his knee on her upper back.

Then he throws three punches into her rib cage.

The girl's legs are seen slightly kicking upon the impact as passerby shout horrified with the blows.

The video was shared online by a girl who claims to be the victim's cousin, captioning the clip: 'My 14yrs old cousin which is a girl should not have been handled this way'.

However, the Coral Springs Police Department are defending their actions despite the use of excessive force.

They say the video doesn't show the whole story and that the cop in the video did not go against protocol.

'I'm pissed. I'm angry. I would never expect this to happen,' the teen's mother Jessica Dennis said to CBS Miami.

'He went completely overboard. It was completely unnecessary. Her hands are pinned up, he’s fishtailing her whole body with her shorts, it was just too much going on and she clearly wasn’t aggressive,' she added.

The victim, who has not given out her name and refused to be pictured on camera, is a high school freshman.

The victim's attorney Meeghan Moldof said: 'I'm not going to comment on the criminal aspect of the case. But to say that the police officer was justified to punch her continuously while he has his knee on her back and her hands under her belly, the video speaks for itself.'

'The officer's actions were 100 percent within policy, legal and were not excessive,' Deputy Chief Brad McKeone said.

Police were called to Coral Square Mall on Thursday due to the large group of teenagers.

One woman, according to the police report, said 'one of the teens knocked her five-year-old daughter down.

The group was escorted off the property and within an hour a small group returned. Coral Springs Officers also returned and arrested a male then tried to arrest the 14-year-old girl in the video but she, according to police, resisted arrest.

Deputy Chief McKeone said the punches were to gain compliance and not out of malice to intentionally harm the girl.

Cops say when they tried to place her into the squad car, she kicked an officer. CBS added that she allegedly talked back to the officer trying to arrest her.

Coral Springs Police Department said they are not investigating the male officer that threw the punches in the video but they will have to if the mother of the victim decides to file a complaint.

'There is a video that is circulating showing CSPD officers arresting a 14-year old female at the Coral Square Mall on October 18, 2018. As with all social media posts, it shows only the end of the story, not the incident in its entirety which led up to the arrest,' the post said.

Cops said that the teens were 'harassing patrons and causing a disturbance' leading to their ban from the mall.

'One of the male teens was taken into custody without incident. As a result, the female teen seen in the video began cursing, attempting to incite the other teens,' the post adds.

Police say she began to fight and resist arrest, leading cops to bring her to the ground and strike her in the side to get her to release her clenched fists then place her in handcuffs.

'The Coral Springs Police Department believes in transparency. It is important for people to have all of the facts before rushing to judgment of an officer’s actions when faced with calls for service involving violent suspects - regardless of their age or gender,' the post ends.