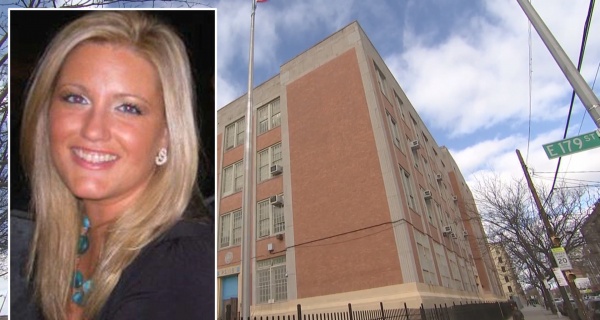 A white Bronx social studies teacher facing termination for a controversial lesson on slavery says she is the victim of reverse-racism — and has filed a lawsuit, which her lawyer says could be worth $1 billion.

The notorious teacher’s attorney even says white teachers who work in the Bronx deserve combat pay.

The Daily News exclusively reported in February that Middle School 118 teacher Patricia Cummings singled out black students and told them to lie on the floor for a lesson on U.S. slavery — and then stepped on their backs to show them what it felt like, according to several students and one staffer.

The story sparked protests and reactions from an array of elected officials – but Cummings says in a Notice of Claim filed in anticipation of a lawsuit against “the city, parents, students and the media” that the account of the lesson is all wrong. She says she was the victim of reverse discrimination, defamation, negligence and other claims worth the eye-popping sum.

Her Notice of Claim — which says she’s owed $120 million in damages — even states that the lawsuit could become a class action reverse racism suit worth upwards of $1 billion.

“It’s a scandal,” Cummings’ attorney Tom Liotti said. “There is blatant racism and reverse discrimination in the public schools of New York City. This is why white parents do not want to send their children there.”

Liotti said its past time for the Board of Education to wake up to reverse racism.

“It’s no longer the blacks and minorities who are being discriminated against,” he said. “It is discrimination against white teachers who are making great sacrifices to be there.”

In Cummings’ version of the lesson on Jan. 9, she took advantage of a “teachable moment” after showing a five-minute clip from the movie “Freedom.”

She says she asked four student volunteers to sit close together to show the “cramped conditions” aboard a slavery ship crossing the Middle Passage.

Bu she denied that any child laid on the floor at any time during the demonstration and denied making any physical contact with any student.

Cummings also alleges that Education Department investigators ignored evidence and a witness who backed up her version of events.

“We’ve begun the process of firing Ms. Cummings based on an investigation of this unacceptable behavior and her performance as an educator,” Cohen said. “We’ll review this baseless lawsuit.”

“The Bronx has been described by some as a ‘war zone.’ White teachers who work there should get combat pay,” Liotti said.

“This is a case of blatant, reverse discrimination and we are going to teach the City and those responsible a lesson. This goes for Mayor de Blasio who will have to learn that his constituents are multi-ethnic, racial and religious. They include white people and dedicated teachers.”

The Notice of Claim strongly criticizes The News’ coverage of the lesson. The claim states that The News relied on the account of one student in Cummings’ class, when in fact the article quoted two different students and reported that students and a staffer described what happened.

The DOE moved Cummings out of the classroom and into a rubber room after the incident. She says an investigation “exonerated her from the false allegations.”

But Education Department officials said Cummings received a discontinuance notice on September 17th notifying her she’d be fired in 30 days.

Cummings held a probationary position as a teacher and probationary teachers have an opportunity to present information to challenge the process during those 30 days, as well as the right to appeal.

Rev. Kevin McCall, Crisis Director for the National Action Network, said the city did the right thing in seeking to terminate Cummings.

“The Department of Education did a thorough investigation as we asked them to. This is nothing but a case of stupidity,” McCall said. “We will be sending a letter thanking the Chancellor for doing what is right.”