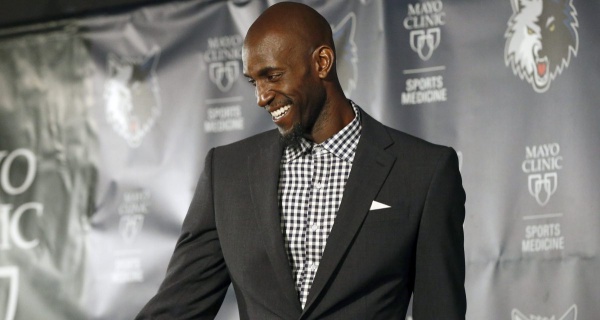 Vikings quarterback Kirk Cousins remembers a time, shortly before the 2012 NFL draft, when he needed $10 from his parents to see a movie. Then his $300,000 signing bonus check arrived.

Cousins now has the biggest guaranteed contract in NFL history — three years for $84 million — and said he works with between seven and nine finance professionals.

But even though Cousins has grown accustomed to the big money in pro sports, he was still taken aback this month when he learned former Timberwolves forward Kevin Garnett had sued his accounting firm for allegedly helping his longtime friend and financial adviser steal $77 million of his money.

Most people can’t fathom what it’s like having that much money, let alone losing it. But sports millionaires, including several of Minnesota’s other highest-paid sports stars, could feel Garnett’s pain. Especially because the man at the heart of Garnett’s lawsuit, Charles Banks, was a member of the 15-time NBA All-Star’s inner circle for two decades.

“You can talk about doing background checks, you can talk about trying to get someone who’s credible,” Cousins said. “But at the end of the day, I’ve seen people who in a million years you never would have thought they would swindle someone, and they did.”

“It has to be alarming for everyone,” Wild forward Zach Parise said. “You think you know people, you think you trust people, and they pull a fast one on you like that. … It can happen to anyone.”

Former Wolves center Cole Aldrich was playing for Oklahoma City in 2012, when ESPN released the documentary “Broke,” detailing how former NFL players Bernie Kosar, Andre Rison and others had squandered their fortunes through bad investments and lavish spending. Aldrich said the entire Thunder team watched that film together.

“There are a number of guys in each locker room that live paycheck to paycheck, and they make anywhere from the league minimum to $15 million,” Aldrich said. “We’ve all had teammates where you’re kind of like, ‘Dude, if you don’t have any money now, you’re definitely not going to have any money in three years.’ ”

In 2009, Sports Illustrated reported that an estimated 60 percent of NBA players go bankrupt within five years of leaving basketball, and that 78 percent of NFL players are either bankrupt or under “financial stress” within two years of retirement.

The NFL disputed that number but acknowledged that “nearly half” of the 1,063 former players it surveyed, through a University of Michigan study, had experienced significant losses in business or financial investments.

Each sports league has worked to educate young players through programs such as the NBA’s Rookie Transition Program and the NFL’s personal finance boot camp.

“You just don’t want to be another statistic,” said Vikings running back Latavius Murray, who is currently working on a master’s degree in business administration from Syracuse University. “I have a family now. There are things I want to do after I’m done playing. I cannot be in the 2025 version of [‘Broke’].”

According to Garnett’s federal malpractice lawsuit, his accountant, Michael Wertheim, “possessed actual knowledge that Banks was helping himself to millions of dollars of Garnett’s money and did nothing about it.”

Defense attorney Greg Simpson declined to comment further this past week after previously saying Wertheim and the agency Welenken CPAs “intend to vigorously defend themselves against the allegations.”

How much the $77 million loss damaged Garnett’s fortune is unclear. He remains the highest-paid player in NBA history, having earned $335 million by the time he retired from the Timberwolves two years ago.

Nine months after his final game, Garnett made a surprise visit to a federal courthouse in San Antonio, where Banks had been sued by Tim Duncan, Garnett’s basketball archrival. Banks pleaded guilty and received a four-year federal prison sentence for defrauding more than $7.5 million from Duncan.

Sitting on Banks’ side of the courthouse, Garnett listened to the testimony from Duncan, a fellow 15-time All-Star with the San Antonio Spurs.

Banks “earned my trust as my financial adviser and friend,” Duncan said in a statement during the sentencing. “So I felt comfortable moving forward without replacing the checks and balances.”

Guillermo Contreras, who covered the case for the San Antonio Express-News, later saw Garnett and Duncan shaking hands during a courtroom break, with Duncan appearing to warn Garnett to watch out for Banks.

“It’s just kind of heartbreaking,” Aldrich said. “Because you see a guy of [Garnett’s] stature who has made that much money, and it kind of hits home.”

Twins first baseman Joe Mauer said financial advisers started approaching him, hoping to earn his business, back when he was in high school at Cretin-Derham Hall.

“It was crazy,” Mauer said. “Fortunately, I have a guy my family has known for a long time. You build that trust, and I’m very happy with him and everything he’s done for us. But it’s a tough deal for sure.”

Hockey has just as many financial horror stories as any other sport. In 2012, former Wild forward Dany Heatley sued his former agent and the agent’s parents, alleging they lured him into $11 million worth of bad real estate investments, and eventually won $6.5 million in judgments. Former North Star Mike Modano told the Toronto Globe & Mail a decade ago that he lost as much as $4 million on lousy investments. Columbus defenseman Jack Johnson, a Shattuck-St. Mary’s alum, declared bankruptcy while saying his parents mismanaged his investments.

“A lot of us are from blue-collar families and you get the money, no one knows what to do with it,” said Suter, who has a 13-year, $98 million contract to match Parise’s.

Suter said he’s been fortunate to work with his financial adviser, Dan Brooks, the son of Herb Brooks, who coached Suter’s dad, Bob, on the 1980 “Miracle on Ice” Olympic team.

Former Vikings quarterback Brooks Bollinger is an adviser at NorthRock Partners, where about half his clients are from the sports industry. He remembers the anxiety he felt as a player, knowing he didn’t have the best answers on how to handle tax questions and investment decisions.

“The problem with athletes is they don’t get to learn those cheap lessons,” Bollinger said. “They learn very expensive lessons early on and they don’t have the opportunity to recoup that money because they’re not going to earn it again.”

For Cousins, Garnett’s story is a reminder not to let his guard down. He said he’ll “keep my head on a swivel” with his financial team and “make sure that nobody’s too comfortable.”

“You can work as hard as you want on the football field,” Cousins said. “If you make a poor decision off of it, it could negate everything you’re doing here.”