Rumor Of A Teacher's Affair With Students Prove To Be True 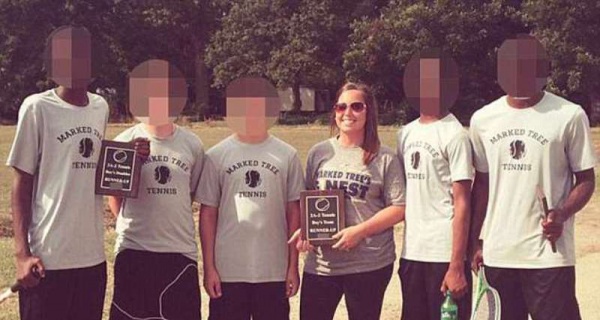 It’s a parent’s worst nightmare. You hear rumors of a predator in your children’s school who has been active for some time. To make matters worse, you hear that this predator has been soliciting your children through the most common medium of the day: their cell phone.
Parents at Marked Tree High School in northeast Arkansas were furious, so furious in fact that they were ready to start taking matters into their own hands. That is, until the strangest of circumstances came about...

There were rumors going around that one of the teachers at Marked Tree High School in northeast Arkansas was engaging in very inappropriate behavior with their students. Of course, none of the students were going to rat them out. After all, many of them, especially the young boys, didn’t see anything wrong with that at all.

One of the other teachers at the school, Barbara Wilburn, who coaches the men's basketball team, heard about the angry parents from one of her students. Apparently, one parent was so angry at the rumors that they were threatening to come to the school and inflict bodily harm on her culpable colleague...

With nowhere else to turn and no name to go on, Wilburn went to the principal with the information she’d received. The principal in turn went to the superintendent, who insisted that they file a report before taking any further action. Just as Wilburn and the principal began the paperwork, there was a knock at the door…

Jessie Lorene Goline was one of Marked Tree High School’s art teachers. Bespectacled but very pretty, most people would assume that Mrs. Goline was a shy person. What no one, including her work colleagues realized, was that she was anything but shy: especially when it came to her attractive male students...

It was Jessie Goline who had burst into principal Matt Wright’s office. She was crying when she arrived and seemed in a panic. He immediately dismissed Ms. Wilburn and tried to calm down the inconsolable art teacher. He asked her what was wrong, not knowing that she was the person whom he and the coach had been discussing.

Something to Tell Him

“No, no,” replied Mrs. Goline, through choked tears. She tried to compose herself and when she’d finally calmed down told the principal that there was something she needed to tell him. “I’m not going to lose my husband,” she added. Principal Wright’s heart dropped, he knew what she was about to say...

Goline told the principle that not only had she engaged in sexual relations with several young men, but that all four of them had been her students. One of the boys was from nearby East Poinsett High School, but the other three were her students at Marked Tree High. It seemed the angry parents were justified in their suspicions, but how could the culprit have been Mrs. Goline?

It seemed that Mrs. Goline had began her courtship of these young men with the aid of their trusty cell phones. She insisted on getting all of her class’ numbers so that she could keep in contact with them about assignments, but obviously, her real motivations were much less innocent than reminding them their sculpture was due the following Monday…

In reality, Mrs. Goline’s text messages were less about school assignments and more about instructions for lunchtime rendezvous at her home nearby. Sporadic initial texts about coursework soon gave way to more frequent communications focused entirely on flirting.

Before long, Mrs. Goline was picking up the underage student from school and driving him to her home 45 minutes away in Jonesboro, Arkansas while her husband was out at work. The two engaged in intercourse and Mrs. Goline drove him back to school. But her work wasn’t done yet...

Another encounter with yet another underage student occurred the same night, in the very same apartment. This time, the 25-year-old art teacher brought a different boy home and had sex with him twice before dropping him back at home later that night.

As it happens, Mrs. Goline did this multiple times between January 2016 and April 2016, having sex with no less than four students. To make matters worse, she had apparently sent the students a number of suggestive and overtly sexual picture messages as well, in order to entice them to come with her...

Yet, the question remained, if Mrs. Goline hadn’t come clean, would she ever have been caught? After all, the parents in question didn’t know which teacher had been schtupping her students, just that one of them was. The police are confident that she would have, mainly because young boys’ reactions to abuse are very different than those of young women.

According to them, boys have a tendency to brag about their “conquests” especially when it comes to being pursued by older, more experienced women. Many of them don’t see what happened as sexual abuse, but simply a lucky break. It was this bragging behavior that began the rumors…

Mrs. Goline’s tears notwithstanding, Principal Wright immediately contacted the police who arrived at the school and read the randy art teacher her rights. She was taken to the Marked Tree Police department and is now under investigation by the Arkansas State police thanks to her dalliances with students from other schools as well.

Apparently there was one major problem with the case against Jessie Goline: it was possible that only one of the students was under 18 at the time of intercourse. If that turns out to be the case, it means that she will only be charged with one count of first-degree sexual assault. Of course, that doesn’t justify what she did...

The district attorney assigned to the case has since stated that, despite his office’s attempts to persuade them otherwise, the three 18-year-olds had decided not to press charges in order to protect their own privacy. As far as these young men were concerned, the acts were indeed adulterous on Mrs. Goline’s part, but also completely consensual.

District Attorney Ellington is not surprised by this though, nor is he at all surprised by the case itself. He referenced at least seven cases in the last decade where older women, usually between mid 20’s to late 30’s, teachers mostly, engaged in sexual relationships with students or other underage men. It’s a troubling epidemic to be sure...

Despite the fact that Goline can only be charged with one count of sexual misconduct with a minor, her confession did, however, mean that she could be instantly dismissed from her position effective immediately. She was placed on administrative leave in May and if she is convicted of the Class A felony, could be sentenced to up to 30 years in prison.

In addition, the school reported her disgusting behavior to an ethics division of the Arkansas Department of Education. As difficult as the process has been for the parents and the other students, the case has forced the school district to place greater emphasis on teacher background checks and keeping their students safe.