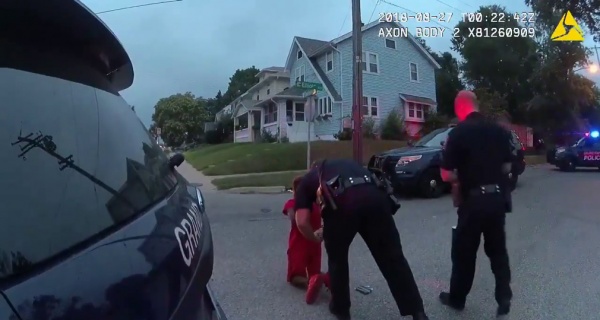 A mother of five wants answers after she said police drew their guns and handcuffed her unarmed twin 11-year-old sons in Southeast Grand Rapids.

Juanita Ligon, 37, said police "racially profiled" her sons, Martrell and Martrez Coston, Sunday evening, Aug. 26, when they stopped the boys, ordered them to the ground, and handcuffed them while responding to a report of teens seen with a gun in the area.

Ligon said the police didn't find a gun, and the youths were released from custody. But the incident was enough to traumatize her sons, and she wants the involved officers fired for failing to adhere to the department's newly adopted youth-interaction policy.

"How do we have a policy in honor of Honestie Hodges and you violate that policy and the new training by doing the same thing you did a few months ago with the same age kids?" Ligon asked.

"They wrote a policy to shut the community up. They're supposed to take better precaution, not use excessive force unless they feel in danger. No way they felt in danger by my boys because they're trained to seek out if a person is acting suspiciously."

Several attempts to contact the Grand Rapids Police Department about the incident, including calls, texts and emails by MLive/The Grand Rapids Press, were unsuccessful Wednesday.

Ligon said her sons were walking to Little Caesars on Sunday, accompanied by a 17-year-old male friend of the family, when they were stopped by a police officer who ordered them to the ground.

One of the youths estimated that it was about 10 seconds before an additional "six or seven" police vehicles pulled up to the scene. The officers ordered each juvenile to walk backward toward them with their hands in the air, Ligon said.

The 17-year-old and the first of the 11-year-olds were handcuffed, searched, and placed in the back of separate police cars while officers searched the third youth. When no weapons were found, police released the twins to their grandfather, who had arrived on the scene, Ligon said.

The mother estimated that the incident took at least 10 minutes since neighborhood children had time to walk 2.5 blocks to notify the Coston's grandfather, who then walked back to the scene and arrived as the boys were being released.

Ligon received a call from one of her sons soon after, but couldn't understand him through his crying. While on the phone, she got a second call -- this time from an officer.

She also said the police told her they knew they were looking for a pair of black 13-year-old males, including one in a red shirt and one in a black shirt. Two of the three youths had shirts that matched those colors.

"The police told me they had to call the initial caller back and get a clearer description and that they got an extra detail that the suspect had on blue jeans and none of the boys had jeans on," Ligon said.

"They didn't have a clear description so they stopped the first group of black boys they saw? That's nothing but racial profiling."

The mother said both sons told her they were handcuffed, though she only heard from the officer that one son was cuffed. She has since filed a complaint with the police department's internal affairs unit, and contacted the Grand Rapids NAACP.

Sunday's episode was all too familiar to Ligon, who recalled the Dec. 6 incident in which 11-year-old Honestie Hodges -- a black female from Grand Rapids -- was handcuffed at gunpoint while police were searching for her 42-year-old white aunt who was accused of an earlier domestic stabbing.

The use of force in Hodges' case resulted in public outcry and was the inspiration for the police department's adoption of a youth-interaction policy in March.

As written, the policy is meant as a guide, instructing officers to use the most reasonable and least restrictive options of interaction while maintaining public and officer safety.

It also requires officers take the totality of circumstances into consideration before making decisions on things like cuffing a minor, and instructs officers to notify a parent or guardian of the youth after they are patted down, searched or handcuffed.

After the policy was adopted, some residents and city commissioners voiced their concerns that it didn't do enough. Third Ward commissioner Senita Lenear was also persistent in asking how the policy would enact change.

Now Ligon is echoing those same concerns about the policy. And she wants the police department to explain why its officers didn't use less force toward her children.

She said she plans to look into counseling for her sons, who "had a positive image of police" prior to Sunday's incident.

"We have two (non-Grand Rapids) officers in our family, so we have a good rapport with police," Ligon said. "My sons had a good bond with police and a level of respect for them, which is broken now and I can't fix that."