New Data Confirms STDs Continue Rapid Rise In The US 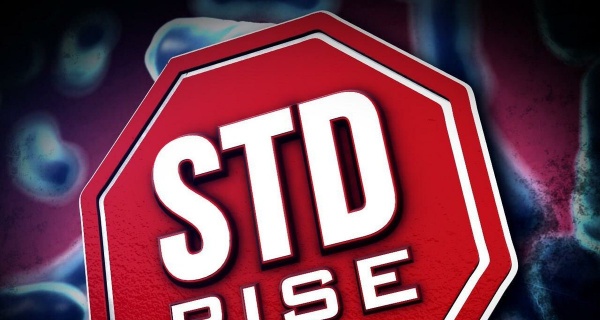 Sexually transmitted diseases are on the rise in America, according to new data from the Centers for Disease Control and Prevention. In fact, nearly 2.3 million cases of chlamydia, gonorrhea and syphilis were diagnosed in the U.S. in 2017, surpassing the record set in 2016 by more than 200,000, CDC scientists reported Tuesday.

Experts say many factors have contributed to the rapid rise, though the biggest one may be less frequent condom use. It’s less clear whether dating apps, like Tinder, have contributed in some way to the spread of STDs, though some researchers think they have.

“We have seen steep and sustained increases over the last five years,” said Dr. Gail Bolan, director of the Division of STD Prevention at the CDC. “Usually there are ebbs and flows, but this sustained increase is very concerning. We haven’t seen anything like this for two decades.”

In the past, the majority of syphilis infections were seen in gay men, bisexual men and other men who have sex with men, Bolan told NBC News. “More recently, there have been increases among heterosexual men and women, including among pregnant women, which means we’re starting to see these infections in their babies.”

Bolan and others suspect that newer drugs that have made HIV less lethal as well as one that lowers the risk of being infected could have contributed to declines in condom use. An Australian study that followed nearly 17,000 gay and bisexual men before and after a campaign to promote pre-exposure prophylaxis, the use of drugs that protect against HIV infection, found that condom use had fallen dramatically. Before the campaign, 46 percent of the men studied were using condoms; after, only 31 percent were.

“Certainly we’ve known since lifesaving HIV medications became available in the 2000s, things changed,” Bolan said. “Added to that was the very important advance for HIV prevention. But those tools don’t prevent STDs. Now we’re seeing declining use of condoms not just in gay and bisexual men, but also in heterosexuals.”

Another factor driving the skyrocketing numbers of STD cases may be a decline in funding for state and local agencies working on prevention, said Michael Fraser, executive director of the Association of State and Territorial Health Officials.

“We’ve seen a tremendous increase in many areas primarily due to the eroding public health infrastructure,” he said. “The lack of funding at the state and local level to really invest in prevention work is not just about medications, it’s about disease investigators who meet with the individual who is infected and talk about their behavior and do contact tracing to try to prevent the future spread.”

The United States “continues to have the highest STD rates in the industrialized world,” said David Harvey, executive director of the National Coalition of STD Directors.

Along with declines in funding, there are two other factors driving the skyrocketing STD rates, Harvey said. “There is an extreme lack of awareness about STDs and sexual health," he said, "and doctors are not screening and testing for these diseases and patients don’t know they need to ask to be tested."

One of Bolan’s biggest concerns is antibiotic-resistant strains of gonorrhea. Currently, some strains are susceptible to only one antibiotic. “The history of gonorrhea is that every time we’re down to one antibiotic, it mutates,” she added. “It’s hard to think back to the era of having no treatment for bacteria.”

Syphilis diagnoses, which rose by 76 percent, from 17,357 to 30,644, were mostly in men. Syphilis in women is especially concerning because it can have a major effect on developing fetuses. In the mid-20th century, studies showed that 40 percent of fetuses born to mothers infected with syphilis were either stillborn or died shortly after delivery, Bolan said.

“But that was before the advent of penicillin,” she added. “We don’t have current data on the impact of fetal syphilis. In our country stillbirths are undercounted. We are now trying to educate providers to understand that in the cases of any stillbirth, the mother needs to be tested for syphilis.”

The chlamydia rate held relatively steady with more than 1.7 million cases diagnosed in 2017, just a few percentage points above where it was in 2013. Nevertheless, the chlamydia rate is worrisome because the disease can scar a woman’s reproductive organs and leave her infertile. Chlamydia and gonorrhea are most common in young people aged 15 to 24, Bolan said.

“STDs are widespread and cross urban and rural boundaries,” Bolan said. “They cross socioeconomic boundaries. We’re seeing STDs in places we haven’t seen them before.”

One big problem: all of these STDs can be asymptomatic, Bolan said. So the CDC recommends that sexually active people under the age of 25 get tested whether they have symptoms or not.

Charlotte Gaydos, a professor of medicine at the Johns Hopkins University School of Medicine, said most of those people are not getting tested.

The numbers presented by the CDC may not be quite as alarming as they sound, Gaydos told NBC News. “Certainly the numbers are increasing, but some of the increase may be due to the fact that we are doing more testing,” she added. “The more you look, the more you find. Also, they’re now using a more sensitive test for chlamydia and gonorrhea.”

Gaydos also believes that the breakthroughs in HIV treatment and prevention have had the unintended consequence of driving an increase in other STDs. “Part of the problem is that people are not afraid of dying from HIV now so they are less likely to use condoms,” she said. “And they are more likely to have multiple partners.”

It’s also quite likely that apps like Tinder have helped drive up the rates of STDs, Gaydos said. “It’s easier to find partners with the dating apps,” she explained. “People can find partners and they don’t even need to know their names.”

“That way we can treat people before they leave the clinic,” she added. “Many don’t come back. If we could do a rapid test, we could treat them before they left and eliminate future spread.”