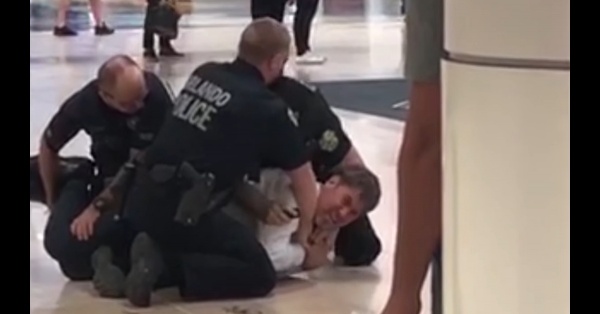 If you were at the Orlando Intentional Airport on Thursday, you might’ve witnessed a heck of a spectacle. Dr. Jeffrey Epstein was arrested after allegedly refusing the leave the building.

You can see video of the incident below.

“You’re treating me like a f****** black person!” he yells at the three arresting officers as they attempt to handcuff him on the floor.

Cops said he brought that on himself. They claimed to get a call about a disruptive passenger at the American Airlines ticket counter, according to WESH. When they arrived, Epstein started acting out, and yelled, they said.

According to cops, he began to calm down at first, but then grew livid on learning the airline was kicking him off the flight because of his actions.

As seen on footage, Epstein attempts to chew out the cops.

In the arrest report, police said they had asked him to leave for public safety purposes. A cop noted he had “white froth” around his lips, and asked if “he was having an issue.”

“You want to test me?” Epstein says on video. “You want me to count backwards?” He puts his hands up and dares the officers to arrest him, or get him a flight. Cops chose option A.

Things truly escalate after he accuses one of the officers of being rough while handcuffing him. He yells back at them. A struggle ensues. They get him to the ground.

He continues to complain about the officers being rough with him, and said they were treating him like a black person. Footage cuts off when an officer threatens him with pepper-spray because he isn’t putting his hands behind his back.

Epstein, eyes still apparently irritated from the pepper-spray, defended himself in an interview with WESH. He said the airline should’ve have called the cops on him, and said the police should’ve deescalated the situation. Asked what he meant about the “black person” statement, Epstein said he was “making a point.”

“If you’re going to do this to a white doctor, who is 59 years old for doing nothing, then why should black people trust you?” he said. Epstein also reportedly said “I’m a conservative Republican, I’m a Trump guy.”

“[U]ntil the police fix this problem, I don’t blame black people for being upset when they get arrested,” he said.

Epstein was arrested for resisting arrest, trespassing after warning and disorderly conduct, and battery on a law enforcement officer (he allegedly kicked one of the cops).