Woman Shoots Her Lover On Facebook Live As His Wife Watches 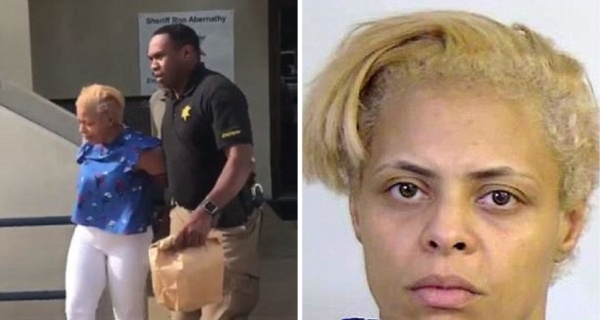 A mistress held her Alabama lover at gunpoint on a Facebook live watched by his wife before shooting him because she was angry he hadn’t signed divorce papers, according to police.

The victim’s wife posted on Facebook that Keanna Cammon, 38, had called her via the video chat service on Wednesday and showed that she was holding the weapon to the 30-year-old’s head.

Shocking grabs from the Facebook Live at 10:30am show Cammon pointing the pistol at the camera while the wife looks on aghast.

‘This crazy a** b**** Keanna Cammon just called me live with a gun at my [expletive] husband’s head,’ the wife wrote on Facebook.

‘I don’t know if he is OK and I don’t where about he is in Tuscaloosa. Can somebody help me? I’m at work, and I am about to lose it. I think she shot him.’

Two hours later she posted: ‘She [expletive] shot him. I’m about to lose my (expletive) mind.

Police arrived at a property in the 600 block of 27th Street in Tuscaloosa and found the husband shot in the torso.

He is now in a critical condition at DCH Regional Medical Center, WVTM13 reported.

Cammon admitted to police she was waving the gun and said it fired when she was arguing with the victim’s wife, according to court papers seen by Tuscaloosa News.

The wife told cops Cammon was threatening to kill her husband if he did not finalize their divorce. Cammon filed for divorce from her own husband last week.

Cammon has been charged with attempted murder and is in Tuscaloosa County Jail on a $60,000 bond.