7 Reasons Americans Are Getting Heavier 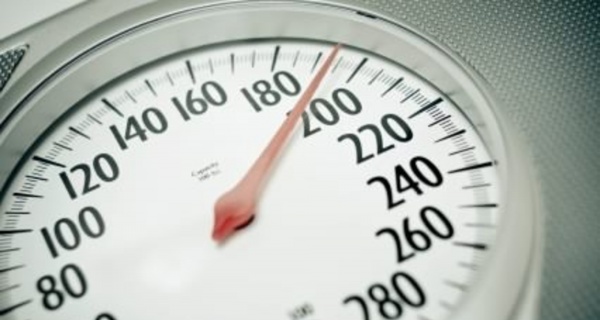 Date Posted: Thursday, August 9th, 2018
It’s no secret that Americans have gotten much, much bigger over the past few decades. The signs are all around us, from XXXL clothing sizes to supersize movie seats and even larger coffins.
According to an analysis from the Centers for Disease Control and Prevention, the average American man now stands at 5-feet-9 1/4 inches tall and weighs 196 pounds — up 15 pounds from 20 years ago. For women, the change has been even more striking: The average female today stands 5-feet-3 3/4 inches and weighs 169 pounds. In 1994, her scale read 152 pounds
The latest CDC estimates now show that, as of 2016, 40 percent of US adults and 19 percent of youth were obese. 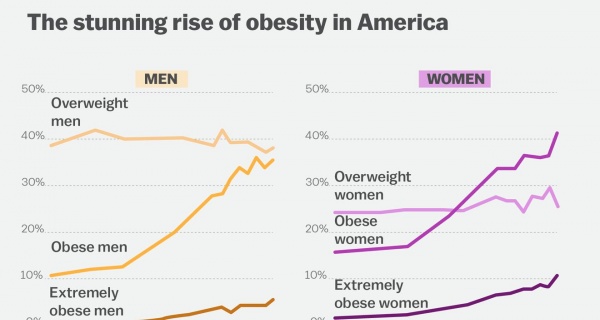 This data on the state of our weight comes from the National Health and Nutrition Examination Surveys (NHANES), a combination of interviews and physical examinations that's considered the gold standard measurement. Since the 1980s, the NHANES has been charting obesity rates — and extreme obesity rates — as they've soared.
Alongside the rise in obesity, we’ve also seen growing rates of associated chronic disease — like diabetes, heart disease, and metabolic syndrome.
Clearly it’s gotten easier and easier to gain weight, and harder and harder to avoid it.
So what’s going on here? There’s an obvious answer — we eat more than we burn off. But increasingly public health experts agree that we are not consciously choosing to overeat.
"The food environment is a strong predictor of how we eat," says Scott Kahan, director of the National Center for Weight and Wellness and a faculty member at both Johns Hopkins and George Washington University. "And in America, the unhealthiest foods are the tastiest foods, the cheapest foods, the largest-portion foods, the most available foods, the most fun foods."
But why talk about how our food environment enables overeating with words when we can show it with charts? Let’s do it.
1) We eat out — a lot
Americans are cooking less and less and eating away from home more and more. And that’s leading us to chow down more than we would if we were home.
More than half of our food dollars are now being spent on restaurants and convenient on-the-go meals. In 2015, for the first time, Americans spent more money eating away from home than they did on groceries.
Sure, it’s possible to have a small, healthy meal at a restaurant. But researchers have found that people typically eat 20 to 40 percent more calories in restaurants compared with what they’d eat at home.
To understand why that happens, consider data from this recent study in the Journal of the Academy of Nutrition and Dietetics. The authors examined the nutrition content of more than 360 dinner entrees at 123 non-chain restaurants in San Francisco, Boston, and Little Rock between 2011 and 2014. The restaurant dishes contained 1,200 calories, on average — about half of the 2,000 or 2,500 calories recommended for moderately active women and men in an entire day.
2) Portion sizes have gone up, up, up 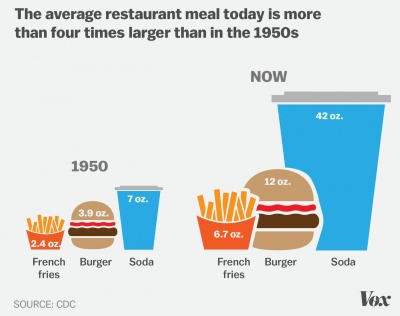 When we eat out, we’re not being served modest plates. The average restaurant meal today is more than four times the size of typical 1950s fare, according to the CDC.
These supersize portions are reflected in our daily calorie intake. The average American’s total caloric intake grew from 2,109 calories in 1970 to 2,568 calories in 2010. As Pew Research put it, that’s "the equivalent of an extra steak sandwich every day."
3) We guzzle sugary beverages on an unrivaled scale
People who drink soda have more obesity, Type 2 diabetes, tooth decay, and other health problems compared with people who don't -- the research on this is clear. And Americans are drinking way, way too much of the sweet stuff. According to Euromonitor’s most recent data, Americans remain the world leaders when it comes to per capita sales of soft drinks.
That said, one of the biggest public health wins of recent decades has been a slow shift away from soda in the United States.
With more awareness about the strong correlation between drinking sweet, fizzy drinks and obesity and tooth decay, sales of beverages like Coca-Cola and Pepsi have slumped.
But we may still be getting hoodwinked by other, equally sugary beverages. According to Euromonitor’s analysis of US retail beverage sales over the past five years, while the soda category is shrinking, juice sales have held steady, and sales of energy and sports drinks have been growing.
4) Healthier foods can cost more 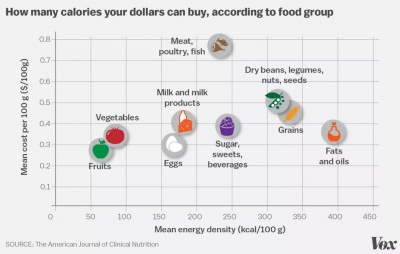 The federal government recommends 1 1/2 to 2 cups of fruit and 2 to 3 cups of vegetables per day. According to the CDC, Americans in every state barely hit these minimum targets.
Fewer than 10 percent of American adults ate enough vegetables in 2013. Fewer than 15 percent consumed the recommended amount of fruit.
The Americans who aren’t eating broccoli don’t have a vendetta against it. Instead, there is a range of economic and social factors that make eating enough fruits and vegetables really hard.
Let’s start with cost: As you can see in the chart, when it comes to how many calories you get per dollar, sugar, vegetable oils, and refined grains deliver a higher bang for the buck than fruits and vegetables. In the long run, nutrients in food (like fiber, vitamins, and minerals) matter more for health than calories alone. But if your household income is low, you’re probably going for the cheapest, highest-calorie options.
5) Our vegetables consist mainly of potatoes and tomatoes 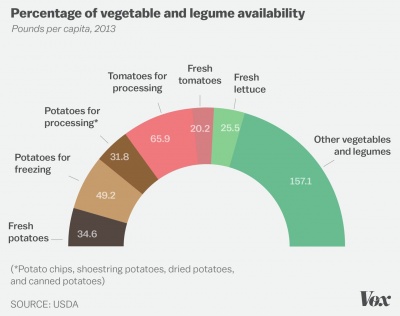 To make things more complicated, there’s a supply problem. We’re told to eat nutrient-dense foods like broccoli and Brussels sprouts instead of energy-dense foods like soda and french fries, yet there aren’t enough nutrient-dense foods to go around. Researchers have pointed out that if Americans actually followed the US dietary guidelines and started to eat the volume and variety of produce health officials recommend, we wouldn’t have nearly enough to meet consumer demand.
As of 2013, potatoes and tomatoes made up half of the legumes and vegetables available in this country, according to the US Department of Agriculture. And when we do eat tomatoes and potatoes, they’re often accompanied by so much sugar, fat, and salt that we’re propelled to overeat.
6) Too many of our meals are like dessert
American breakfast is often nothing more than disguised dessert. And we keep eating sugar throughout the day — in cupcakes, soda, even salad dressing.
So many of the additional calories in our diet that weren’t there a few decades ago are coming in the form of sugar. Back in 1977, the average adult got 228 calories per day from sugar in food and drinks. By 2010, it was up to 300 calories a day. Added sugar consumption increased almost as much — 20 percent — among kids. 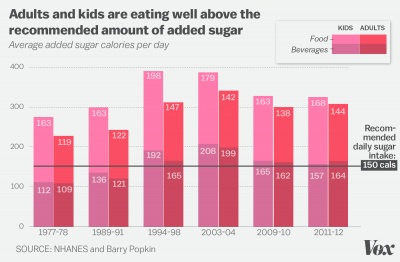 Between 2003 and 2012, sugar consumption in adults and kids has come down a bit. But it’s still way too high.
"Added sugars increase excess energy and reduce nutrient density in our diets, often contributing to weight gain and obesity," said Elyse Powell, one of the researchers at the University of North Carolina Chapel Hill who crunched these numbers.
7) We’re bombarded with ads for unhealthy food
Sugary, oily foods are engineered to be consumed often and in big portions. But we’re not just influenced by their irresistible taste. The food industry is also terrific at marketing its products to us — and turning us into loyal consumers.
A 2006 report by the Institute of Medicine helped establish how the rise in obesity among kids corresponds to increasing marketing of unhealthy food and drinks to them. Since then, public health researchers have tracked food advertising — and have discovered how in some ways, this problem just keeps getting worse.
The UConn Rudd Center for Food Policy & Obesity found that in 2014, food companies spent $1.28 billion to advertise snack foods on television, in magazines, in coupons, and, increasingly, on the internet and mobile devices. Almost 60 percent of that advertising spending promoted sweet and savory snacks, while just 11 percent promoted fruit and nut snacks. And advertising of sweet snacks increased 15 percent, even from 2010 to 2014, according to Rudd’s analysis. 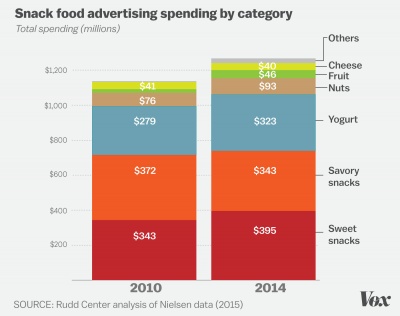 According to Jennifer Harris, director of marketing initiatives for the Rudd Center and lead author of the Rudd report, the public health community has pressured food companies to change how they advertise their products to kids. And there’s been some progress — 10 years ago, she says, companies argued that all of their products were healthy and there was no reason kids shouldn’t be eating them. "Now there’s recognition that the marketing does affect kids’ diets in harmful ways. Now the discussion is around what’s healthy and what’s unhealthy. Now we’re in the details."
But instead of promoting healthier foods, Harris says that companies have mostly reformulated their existing products to make them only slightly less unhealthy.
"The sugar in kids' cereals has gone from an average of 12 to 13 grams to 9 to 10 grams," says Harris. "But the cereal industry has products that do qualify as healthy, and yet they don’t advertise them to kids. The healthy cereals are advertised to parents, not kids."
How the food environment could support healthful eating instead
With the expansion of our waistlines over the past 30 years, the factors in our environment that promote obesity — some of them outlined here — have come into focus. To reverse the trend, health officials have begun experimenting with a number of different policies.
First and foremost is taxation. Taxes helped wean people off cigarettes, and public health researchers think they may reduce consumption of fatty, sugary junk food. US cities (Berkeley and Philadelphia) and several countries (including the UK, France, Hungary, Chile, and Mexico) are experimenting with taxes on junk foods like soda. So far, the (very preliminary) research suggests the taxes may be helping to get low-income families off the sugary stuff — a win since those are the families most at risk of diet-related diseases.
Another tactic researchers argue should be widely tested is putting a warning label on sugary beverages -- the city of San Francisco may soon become the first US jurisdiction to do it. In 2015, it passed an ordinance that would require billboards advertising sugar-sweetened drinks to include this note: "Warning: drinking beverages with added sugar(s) contributes to obesity, diabetes, and tooth decay. This is a message from the city and county of San Francisco." (The industry has challenged the ordinance in court and its implementation has been temporarily blocked.)
A variety of healthier foods — especially fruits and vegetables — also need to be made more affordable and readily available to Americans. To this end, nonprofits like Wholesome Wave have been working with government to offer fruit and vegetable subsidies for the poor, and even experiment with produce prescriptions (which are essentially vouchers handed out by doctors to patients with problems with food access).
Big food companies need to clean up their offerings, working with health experts to create alternatives that aren’t chockablock with fat, salt, and sugar. Kahan noted that many obesity researchers like him are working more closely with the industry. "A lot of big players have made real specific declarations of making healthier products, smaller portions," he said.
The status of fruits and vegetables also needs to be lifted up, so that we see these options in our foodscape instead of only billboards for greasy hamburgers and candy. Here, too, there’s movement. A number of celebrities and even Olympic athletes have been working with nonprofit organizations and grocery stores to appear in colorful advertisements peddling everything from apples to tomatoes.
So progress is happening slowly, but it’ll take time to understand what, if any, impact this has on our health. As Kahan said, "Transforming the food industry is one of the real uphill battles that will have to be fought over the next few decades."