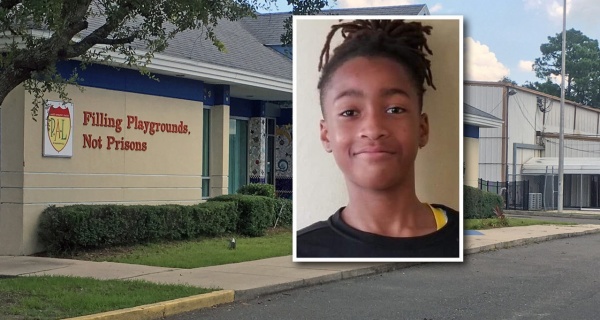 Date Posted: Thursday, August 9th, 2018
An 11-year-old boy from Jacksonville was placed in handcuffs for excessively dribbling a basketball after a police officer ordered him to stop.
Fatayi Jomoh was bouncing the basketball during a game at the Police Athletic League of Jacksonville (JaxPAL) on Saturday when he was repeatedly asked to stop. After ignoring the police officer’s orders, Fatayi was put in handcuffs. His mother, Bunmi Borisade, said she was in another area of the gym at the time.
She was told her son had been “arrested” by a young girl at the event. “A little girl came up to me and said, ‘Hey, excuse me. Your son is being arrested for dribbling a basketball.’ I said, ‘You can’t be serious,” Borisade said, according to News 4 JAX.
Fatayi, who is an honor roll student according to his mother, is now afraid of police officers, which was the opposite intention of the league. He said he wished the police officer had just given him another chance to stop instead of handcuffing him.
Borisade has filed a complaint with the Jacksonville Sheriff's Office, which is currently being reviewed by Internal Affairs. She said the officer acted overly forceful with her son. “The officer who handcuffed my son looked at me and said, ‘He was was being disrespectful.’ I said, ‘Well, why didn’t you come and tell me? I’m his mom.’”
Jacksonville Sheriff’s Office did not immediately respond to a request for comment.
“It’s ruined (my image of police) as well,” Borisade said. “I’m not going to lie and put on a show for the news.” Borisade conceded her son may have been misbehaving, but condemned the police officer for his aggressive tactic to teach Fatayi a lesson.
The incident will have left Jacksonville police red faced, especially given the mission statement posted on the JaxPal website. It reads: “The Police Athletic League of Jacksonville enriches the lives of children by creating positive relationships between law enforcement officers and the youth of our community through educational, athletic and leadership programs.” And, check out the slogan on the PAL in the picture above - "Filling playgrounds, not prisons."
JaxPAL has been running in Jacksonville since 1974, after a young officer in the 1960s, Norm Demers, bought sporting equipment for the children of the city. Demers said he wanted to prevent bored children from participating in crime. According to the JaxPAL website, more than 2,600 children participate each year across six different sites in the city.