Revenge Seeking Wife Does The Unimaginable 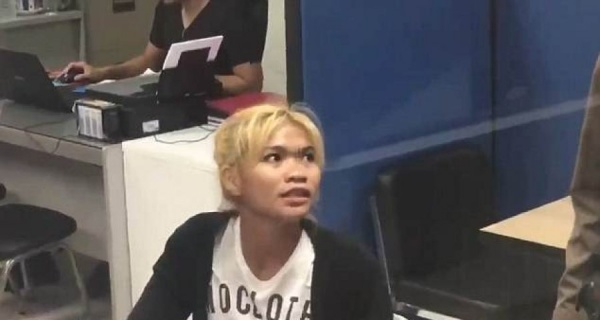 Date Posted: Friday, July 6th, 2018
A JEALOUS wife has been arrested after hacking off her husband’s penis today– with a 12-inch-long carving knife.
Karuna Sanusan, 24, carried out the bloody attack on 40-year-old Siripan after discovering he was having an affair, she told police.
She then hurled his severed manhood out the bedroom window, leaving Siripan writhing and screaming in agony in a pool of his own blood.
Neighbors heard his howls of pain and called the police, who arrived at the couple’s home in Sriracha, near Bangkok, at 6.20am.
Officers recovered his penis and put it in an ice box for surgeons to try to re-attach - but medics said that it would not be possible.
Siripan was rushed to the nearby Samitivej Sriracha Hospital while Sanusan was arrested and held in custody.
She was pictured by reporters sitting calmly as she was interviewed by police.
She told officers that she had recently discovered her husband had been seeing different women and hatched the revenge plot to cut off his penis.
She said: “Me and my husband work together selling organic vegetables at a stall. Before this happened I became suspicious he was having an affair.
“I always saw him flirting with a lot of girls and I had an idea of what he was doing.
“Then I found out that he was secretly going with other women. This made me very angry.
"I was full of anger and couldn't relax. I was so angry inside.
She also told cops that she planned the butchery.
She added: “I aroused him in the morning while he was absent-minded, then used the knife to cut off his penis. I threw it out of the window.”
Siripan was left writhing and screaming in pain in a pool of his own blood following the attack at the couple's home near Bangkok
Karuna Sanusan told police that she 'planned' her attack
Police Colonel Somkid Boonlert, Deputy Head of Sriracha Police Station, said that officers had received an emergency call about a man's penis being cut off with a knife.
He said: “Police arrived along with rescue staff and found the man severely injured. From the initial investigation, it was discovered that the husband and wife had a career together selling vegetables. “She had an idea that he was seeing other women and she took revenge.
“The man had lost a lot of blood. He is now under close medical supervision. He will never be able to use his penis in the same way again. 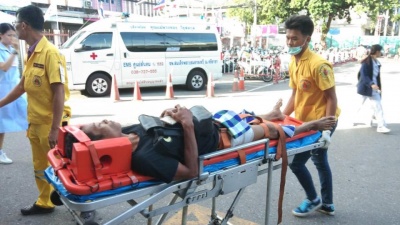 “Doctors said the cells in the penis are dead as it had been out of his body for too long. He will be disabled for the rest of his life.
“Police officers have detained Miss Karuna for legal action and she is being prevented from seeing her husband.”